The year is 2004, people talk about war
I had to hit the floor when the bombs began to pour
Ten minutes ago I was mad cause my stomach was grumbling
Now the whole world is crumbling
I hear people scream across the street gettin crushed
This went on for twenty minutes then the whole world hushed
I couldn't see shit but I could feel myself breathin
Damn I'm still kickin but I'm just not believin
I give thanks to God then I'm off on my mission
Ain't no stars in the sky so it ain't no wishin
I wonder, I wonder, I just can't under-stand
Why, am I the last man?

These crazy thoughts in my head won't stop
Where's my moms and my pops and what about hip-hop
I'm pickin up things that could be of use to me
Too build a makeshift crib where Hollywood used to be
And it ain't no forties, it ain't no blunts
I ain't had no ass in five years and eight months
Five more years pass, and I still survive
And I'm through with wonderin who's still alive
Until one day I'm just walkin along
And I hear this kid singin a hip-hop song He said, "That's the way it is, and it's like that"
I said, "Yo kid c'mere, where you learn that song at?"
He said, "My daddy taught me about the hip-hop game
I'm eight years old and Rakim is my name"
He said, "Yo I'll take you to him, come follow me;
but first you gotta prove that you can MC"
So I cleared my throat got in a b-boy stance
and I ran through a rhyme that made him piss in his pants
With tears in his eyes, he grabbed me by the hand
And then we ran, ten miles across the sand
He took me to the spot, dig deep underground
Where I can hear the sound of the big bass pound
I wasn't really sure, but I swore we smelled blunt smoke
No joke loc, well can I get a toke?
He took me to his pops and he handed me a spliff
And out behind the wall came Tash and E-Swift
They took me to a freestle session it was on
I knew hip-hop would never be gone
FIve hundred hip-hop deep
Yo we cool in 2014, Alkaholiks still rulin

It's gonna live forever
This goes out to the P-Town, LBNT
KnowhatI'msayin?
Check it out
Hip-hop don't stop
Alkaholiks
Check it out
Explain lyrics
Correct lyrics 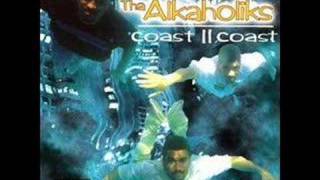