I was snappin out broncs at the Old Flyin' U
At fourty a month a plum good buckaroo
Well, the boss comes around and he says,
"Hey, my lad, well you look pretty good ridin' horses that's bad."
You see, I ain't got no more outlaws to break
But I'll buy you a ticket and I'll give you a stake.
At ridin' them bad ones, well, you ain't slow
And you might do some good at the big rodeo.

While they're puttin' the bull in the chute
I'm a strappin' my spurs to the heels of my boots
I looks that bull over and to my suprise
Well, he's a foot and a half in between his two eyes
On top of his shoulders he's got a big hump
I cinch's my riggin' just back of that lump
I latch in his middle and I lets out a scream
He comes out with a beller and the rest is a dream.

Well he jumps to the left and he lands towards the right
But I ain't no green horn - I'm still sittin' tight
The dust starts to foggin' right out of his skin
He's a wavin' them horns right under my chin
At sunnin' his belly he couldn't be beat
He's showin' the buzzards the soles of his feet
He's a dippin' so low that my boots filled with dirt He's a makin' a whip of the tail of my shirt.

He's snappin' the buttons right off of my clothes
He's a buckin' and a bawlin' and a blowin' his nose
The crowd starts to cheerin' both me and that bull
Well, he needed no help, but I had my hands full
Then he went to fence rowin' and a weavin behind
My head went poppin' - I sorta went blind
He starts in high divin' - I lets out a groan
We went up together, but he come back alone.

Up high I turns over and below I can see
He's a pawin' up dirt just a waitin' for me
I can picture a grave and a big slab of wood
Sayin', "Here lies a twister who thought he was good."
I notice this somethin' don't seem can be true
But the brand on his hip was a big Flyin' U
When I landed he charged, but I got enough sense
So I ran that old bull to the hole in the fence. 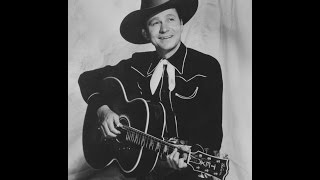