Chorus:
Hi! Up! Santa Anna, we're killin' your soldiers below
That men wherever they go
Will remember the Alamo

Though Bowie lay dyin', his powder was ready and dry
With a smile on his lips, Bowie killed him a few in reply And young Davy Crockett was singin' and laughin'
With gallantry fierce in his eye
For Texas and freedom, a man more than willin' to die

They sent a young scout from the battlements, bloody and
loud
With words of farewell from the garrison valiant and
proud
"Saying, "Grieve not, little darlin', my dyin'
If Texas is sovereign and free
We'll never surrender and ever in liberty be" 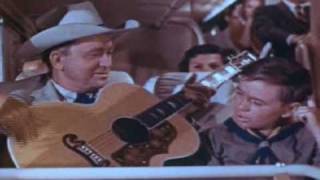 check amazon for Remember The Alamo mp3 download
these lyrics are submitted by kaan
these lyrics are last corrected by Prof. Louis Becker
browse other artists under T:T2T3T4
Record Label(s): 2013 Rockabilly Records