The Ballad Of Davy Crockett Lyrics

The Ballad Of Davy Crockett Lyrics

When he lost his love, his grief was gall
In his heart, he wanted to leave it all
And lose hisself in the forest tall
But he answered, instead, his country's call

Davy, Davy Crockett, the choice of the whole frontier

He went off to Congress and served a spell Fixin' up the government and laws as well
Took over Washington, so I hear tell
And patched up a crack in the Liberty Bell

When he came home, his politickin' done
Why, the big western march had just begun
So he packed his gear and his trusty gun
And lit out a'grinnin' to follow the sun

His land is the biggest, his land is the best
From grassy plaines to the mountain crest
He's ahead of us all and meetin' the test
And a'follern' his legend right into the west 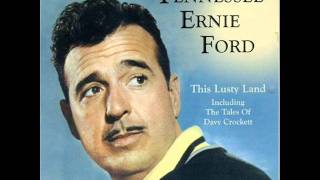