How are you, boys? I'm just from camp and feel as brave
as Caesar
The sound of bugle drum and fife has raised my
Ebeneezer.
I'm full of fight, odds shot and shell, I'll leap into
the saddle
And when the Yankees see me come, Lord how they will
skedaddle!

cho: Hold your head up, Shanghai Shanks,
Don't shake your knees and blink so;
It is no time to dodge the act
Brave comrades, don't you think so?

I was a ploughboy in the field, a gawky lazy didger,
When came the conscript officer and took me for a
sodger.
He put a musket in my hand and showed me how to fire
it,
I marched and counter-marched all day. Lord, how I did
admire it!

With corn and hog fat for my food, and digging,
guarding, drilling,
I got as thin as twice-skimmed milk and was scarcely
worth the killing.
And now I'm used to homely fare, my skin as tough as
leather,
I do guard duty cheerfully in any kind of weather.

I'm brimful of fight, my boys, I would not give a
"Thank 'ee"
For all the smiles the girls can give until I've killed a Yankee.
High private is a glorious rank, there's wide room for
promotion;
I'll get a corporal's stripes some day when fortune's
in the notion.

"tis true I have not seen a fight nor have I smelt
gunpowder,
But then the way I'll pepper them will be a sin to
chowder.
A sergeant's stripes I now will sport, perhaps be
colour-bearer,
And then a captain--good for me, I'll be a regular
tearer.

I'll then begin to wear the stars and then the wreaths
of glory,
Until the army I command, and poets sing my story.
Our Congress will pass votes of thanks to him thast
rose from zero;
The people in a mass will shout, "Hurrah! Behold the
hero!"

(he fires his gun by accident)

What's that? Oh dear! A boiler's burst! A gaspipe has
exploded!
Maybe the Yankees are hard by with muskets ready
loaded.
Oh gallant soldiers, beat 'em back. I'll join you in
the frolic
But I've a chill from head to foot, and symptoms of the
colic. 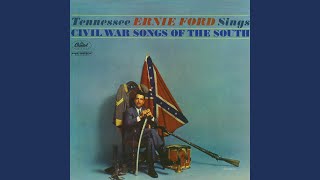 check amazon for The Valiant Conscript mp3 download
these lyrics are submitted by kaan
browse other artists under T:T2T3T4T5T6
Record Label(s): 2011 Capitol Records Nashville All rights reserved Unauthorized reproduction is a violation of applicable laws Manufactured by Nashville Catalog,
Official lyrics by