Lots of times when me and KG are watchin'
All the f**kin' shit that goes down at City Hall,
We get the feeling we should f**k shit up,
Yeah we should f**kin' start a riot.
A Riot!

[spoken]
And then after the smoke is cleared,
and the rubble has been swept away,
me and KG will peek out our heads.
We've been watching the riots on a monitor twenty floors below sea level,
from a bunker.

We did it Rage-Kage, we beat the bastards of City Hall!
[laughs] But now what will we do?
We must rebuild. But who will lead us in the rebuilding process?
Man, it's got to be someone with the know-how
and the elbow grease to lead us to a new land.
No, not me and KG, we don't have the cognitive capacity to lead...
Alright, we'll do it!

[spoken]
The first decree is to legalize marijuana.
The tyranny and the bullshit's gone on too long.
You old f**kin' shrivs who blocked it's legalization,
you're banished from the land!

[spoken]
The second decree: no more pollution, no more car exhaust,
or ocean dumpage. From now on, we will travel in tubes!

[spoken]
Third decree: no more... rich people: and poor people.
From now on, we will all be the same... ummm, I dunno,
I gotta think about that... 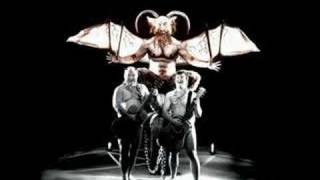