[Intro]
Gang
Gang
I'ma tell y'all something right quick, man
This, this how me and my niggas was coming

[Verse]
Nowadays, lil niggas just wanna shoot
But when I was a shorty, we had a agenda
Pooh Bear alive, we was just on our cream
But when Pooh Bear died, my niggas turned into some killers
'Member me, Shotty, and Spazz Out, and Lucci, and Shotta [?] all through the winter
Really was toting them blickers
It's eat or get ate, I can feed you some hollows for dinner
Bodies got dropped back to back
And my clique stayed intact
Swear to God, boy, we feel like them niggas
Couple our niggas got clapped
Made some niggas fall back and it seemed like our light just got dimmer
Gang 'nem applying that pressure
And Pap was going crazy and that's when our name just got bigger
[?]
I keep a pole on my waist, ain't no mask on my face
It ain't hard to get up with a nigga
Tell that bitch nigga that killed my bro Pap:
"Everyday, every night, I'ma hunt for you, nigga!
Don't ever think you can hide!
Find out where you reside, that's where I'ma get up with you, nigga!"
Got too much pride to let my niggas slide
And just look to the side and put funds on you, nigga
'Cause I feel like it gotta be me
Thinking 'bout the end
Nah, I can't get no sleep
Pappy talking to me, saying: "Bro, let it go!"
And I told him, "I can't 'cause this shit to deep"
Know a lot of niggas thinking that I went sweet
How I do that if I'm still in the streets?
Still in the hood with my niggas toting heat
Try to get up on me, blow his feet out his wheats
Have his ass laying under them white sheets
Still on the block with his blood on my sneaks
You can catch me smoking Bleep by the beach
Slide through ya block and ya goons, we delete
Hop back in the whip, tires going screech
Lay him in a box laying next to the freaks
If you tryna ask who up next, it is me
If you plugged, I'll give you some extra for free
Anything else, get you taxed - that's a fee
I ain't never been none less than a G
Can't get a feature if it's less than a G
Can leave you left if you testing a G
Pappy getting killed was a lesson for me
Can't let a nigga get the best of me
Gotta move carefully
I'ma get rich, move my people out to Beverly
Snake or a rat, something I can never, ever be Need a real bitch that'll never, ever, ever leave
Shoot him in the mouth, that way he don't get to yell or scream
I'm a real nigga, promise, I'll never tell a thing
How the f*ck you ask 'bout some shit that I ain't never seen?
Niggas fake and they gay 'cause they rather sing
Might die 'fore you wake, so you better dream
Try to run, get erased 'cause I got a beam
Smoke dope to the face, promise, I'm a fiend
Real cool in the streets, they say we some things
[?]
Niggas playing in these streets
Lost friends I'll never see again in the streets
[?]
We was really out here, out to play in these streets
Really on go, never playing with the beef
Nigga got clapped, they was saying it was me
f*ck I look like tryna switch on my niggas
When I really used to do hits with them niggas?
I set yo ass up and hit licks with them niggas
When I get that sack, I buy bricks for them niggas
Probably done f*cked through yo bitch with them niggas
I just feel like my niggas bigger than niggas
I promise, we gon' cop them figures
Pull up to the party and hop out a Bentley on niggas
I'm just getting hotter, I ain't even on fire, yet
We come and shoot up yo block like a fighter jet
I can not stop 'til I'm high in a private jet
Far from the hate where them niggas can't find me at
Probably some label that don't wanna sign me, yet
But it's some shit that they also is gon' regret
PBG, TFG
Promise, I won't forget
Soon as I get it, we gonna f*ck up a check
We gotta ball out
Free the guys until they all out
I'm here with my brothers, we can't never fall out
And it's a whole lot of shit niggas don't know 'bout
We pull up, we hop out with Glocks and we show out
And you can catch me in the bricks, by the rowhouse
[?]
And these bitches sluts, so I don't got me no spouse
I know 'cause I got yo bitch in my crib hoed out
And that water deep [?]
I'm screaming: "Free Shotta" until my big bro out
If you disrespect me, I'm pulling my pole out
And shooting at your face 'til yo ass ain't got no mouth
And please do not speak on shit that you don't know 'bout
I stand by myself, I don't blend in with no crowd
I came with the Insanes, they be there when I roll out
And niggas can't take me, they hoping I go out
Explain lyrics
Correct lyrics 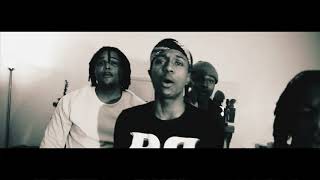