The Worst Pies In London Lyrics

The Worst Pies In London Lyrics

Wait! What's your rush? What's your hurry?
You gave me such a -- Fright, I thought you was a
ghost!
Half a minute, can'tcher sit! Sit you down, sit!
All I meant is that I haven't seen a customer for
weeks!

Did you come here for a pie, sir?
Do forgive me if me head's a little vague--
(Ugh! What is that?) But you think we had the plague!
From the way that people, keep avoiding--
(No you don't!) Heaven knows I try, sir! But there's no
one comes in even to inhale!
Right you are, sir, would you like a drop of ale?

Is that just disgusting?
You have to concede it!
It's nothing but crusting!
Here, drink this, you'll need it! The worst pies in London...

And no wonder with the price of meat
What it is -- when you get it
Never -- Thought I'd live to see the day
Men'd think it was a treat
Findin' poor -- animals
Wot are dyin' in the street!

Mrs. Mooney has a pie shop!
Does her business but I notice something weird.
Lately all her neighbors' cats have disappeared!
Have to hand it to her --
Wot I calls, "enterprise"!
Poppin' pussies into pies!
Wouldn't do in my shop!
Just the thought of it's enough to make you sick!
And I'm tellin' you, them p*ssycats is quick...!

No denying times is hard, sir
Even harder than the worst pies in London!
Only lard and nothing more --
Is that just revolting,
All greasy and gritty?
It looks like it's molting,
And tastes like...
Well, pity

A woman alone,
With limited wind,
And the worst pies in London! 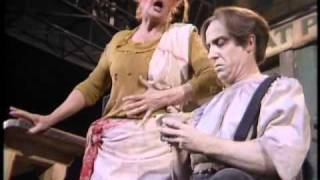 check amazon for The Worst Pies In London mp3 download
these lyrics are submitted by Sanganne
browse other artists under S:S2S3S4S5S6S7S8S9S10S11S12S13
Songwriter(s): Stephen Sondheim

Rate The Worst Pies In London by Sweeney Todd (current rating: 9.50)
12345678910
Meaning to "The Worst Pies In London" song lyrics (2 meanings)
Mrs.Lovette January 8, 2012-9:06
-4
LOLZ!!! I LOVE MY SONG!! WAIT! WHAT'S YOUR RUSH? WHATS YOUR HURRY? YOU GAVE ME SUCH A FRIGHT I THOUGHT YOU WERE A GHOST!
Abby July 23, 2011-5:40
-4
i love this song because she admits that her pies are really nasty and how she kills that bug oh and dont forget the look on Mr.Todd's face lol i love it
Watch Video Comment Enlarge font Correct lyrics Print lyrics