Sweeney:
You got room over the shop, don't you? Times is so
hard, why don't you rent it out?

Mrs. Lovett:
Yeah. And who's to say they're wrong? You see, years
ago, something happened up there. Something not very
nice...

Barker, his name was. Benjamin Barker.

Sweeney:
...What was his crime?

He had this wife, you see
Pretty little thing, silly little nit
Had her chance for the moon on a string
Poor thing! Poor thing...
There was this judge, you see
Wanted her like mad
Everyday he'd send her a flower
But did she come down from her tower?
Sat up there and sobbed by the hour
Poor fool.
Ah but there was worse yet to come, poor thing...

Of course when she goes there, poor thing, poor thing!
They're having this ball all in masks
There's no one she knows there, poor dear, poor thing
She wanders tormented and DRINKS, poor thing!
'The Judge has repented,' she thinks, poor thing "Oh
where is Judge Turpin?" she asks... ...He was there
alright! Only NOT so contrite!

She wasn't no match for such craft, you see
And everyone thought it's so droll!
They figured she had to be daft, you see
So all of them stood there and LAUGHED, you see
Poor soul! Poor thing!

Sweeney:
--NOOO!! Would NO ONE have mercy on her?!

Mrs. Lovett:
So it IS you! Benjamin Barker! 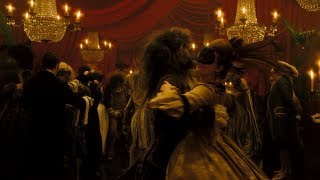 check amazon for Poor Thing mp3 download
these lyrics are submitted by Sanganne
browse other artists under S:S2S3S4S5S6S7S8S9S10S11S12S13