[Styles Paniro:]
You heard it from the P, you oughta know it's the truth
I get you kidnapped and raped and thrown off a roof
You could nod your head to this like it's only a rap
Cause when these bullets hit yo' ass I'm like it's only a gat
I need a funeral to feel good, I'm hopin it's yours
Think he religious? Heard he got shot in the cross
Holiday Styles, bitch I broke most of the laws
f*ck with the Porsche or flip to the boots, stick to the truth
Do anything it takes just to get me this loot
And missin a tooth, but both of 'em chipped, toaster is gripped
You heard about the trouble, I start most of the shit
When I squeeze ain't no controllin the wrist
And niggas leave the room when they hear the P flowin to Swizz
I'm an ignorant and negative nigga
I sell crack, bust guns, pop shit, and say I'm better than niggas
You think not, I'll look at your man and level a nigga
If you think a rapper's better why don't you give me his name
So I can run up on him, tear him up and give you his frame
When it comes to the streets, I'm the nigga to call
Five eight and three quarters, but I'm bigger than y'all
If I left the gun home, I'm a give you the sword
I'm the devil in the flesh, I can't give you the Lord
It don't make no sense for you to pray for your life
I got my niggas in the crib, you oughta pray for your wife

[Styles Paniro:]
Yo...
I do it all for my niggas, even ride with a bomb
Get shot, die in his arm, and give him my last
It's a million dollar bail, I'm a get it in cash
I sell crack like it's '88, I live in the past
You know the P carry the gun, live in the Maz'
Tell niggas show me the money and gimme the stash
I like Malibu and pineapple, fifties of hash
Hundreds of 'dro, wear my clothes a week in a row
Sleep on the floor, catch me right next to the dog
I'm Holiday Styles, and that's what the weaponry for
And I probably won't blow for the fact that I'm hard
But I'm good with ten million in the back of the car
Either that or get life and lift the rack in the yard
Gettin jewels from the old timers, stashin the cards
But jail ain't part of the plans
I keep weight on the scale cause I feel I get further with grams
In my last few bars, I run through niggas like my last few cars
And crash 'em up, the boy mighta went platinum but don't gas him up
I get his length and his width and get his casket cut
I don't deal with the snakes and fakes
But I deal with the comas and wakes, I don't make mistakes
Double R now bitch you oughta know I'm a ghost
Blow up your face, blow up the coke, and blow up the smoke 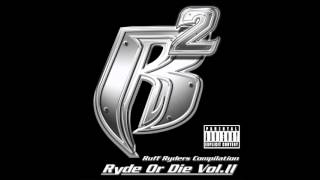