[Styles P:]
You don't get nothin but gun shells
I ain't on the bar, Louch pass me the dumbbells
I'm in war mode, they in more mode
Body after body so the story was foretold
Twist 'em up real tight just like a cornrow, stick in they hair grease
Bullets in ya eye and your earpiece
Bullets whistle like canary for canaries
Your stones is yellow but so is the owner
Ain't a Blood but I'll make him a donor
Crash the whip at the dealer tryin to get me a loaner
Got a spliff that I dipped in Corona
f*ck around make you sip some ammonia
Karma, put your ass in a coma
Ain't nobody give a f*ck if you paralyzed
'Kiss past the saw so I can shave down to barrel size
Said he was the king 'til he looked in the pharaoh eyes
Blow was the bulb was the verse as the arrow ride
What nigga!

[Jadakiss:]
Yup, AH-HA!
Yo, you ain't got to remind me, I'm a top-of-the-line G
If you a fan you can say I been poppin since 9-3
If you my man then you know I been poppin my whole life
Outside 'til it's finished my nigga, the whole night
Few contract and inkpens later
Turn into boss respect, mob ties and kingpin paper Mountin the D, Cardi frames and pink Gators
Gotta learn how to deal with the weak link haters
Don't even think about the top 10, just think Jada
Never eat no less, then I think greater
Gambino affiliate - still transport bricks
A boy on a bike, while my man willie it
Silly shit, imagine how rich we could really get
f*ck a pool table, the crib got a billiard
Streets is our problem, hope Allah's got 'em
Three-piece purple label with the hard bottoms - gangster

[Sheek Louch:]
Silverback! No doubt (yeah)
That's you son, aiyyo I got you though

Aiyyo straight out the gate I pack heavy, big Chevy
24's, bandanna like I'm one of the outlaws
4-4 sit on my lap, other thing in the truck
It's too big and it come with a strap
I got bitches, money, cars in a lot
I already got weed, bring cigars to the spot
Coke in a pot, 'gnac on the counter
Three money countless; get from around us
I probably won't do Yay' or 50 sales
Like they probably won't last in none of these jails
I'm tattooed up, Levi's double sewed Chuckers
No shirt, I'm back muh'f*ckers!
The mac muh'f*ckers don't clack muh'f*ckers
That keep your lil' stink mouth intact muh'f*ckers
Silverback nigga, the Barack O. of rap
L.O.X., D-Block coward, hold that! 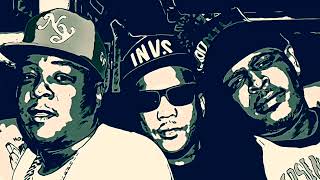