Look
Word to the coke that in my shooter nose (Sniff)
Beluga 2.0s in the coupe I drove
On the stoop in the cold movin' stupid O's
Whip the fish before it even dried, deuce was sold
Take a half, produce a whole when I use the stove
Went from trappin' in Pelle jackets to rockin' Gucci clothes
That's why when you see me I'm with a group of hoes
Bad bitches that look like Karrueche, I'm used to those
Bal Harbor shoppin', my pockets do be swole
Cuban's gold
Put my knife in your body, remove your soul
Use your homie shirt to wipe my knife off
His blood splattered on my Kev Montclair, I stabbed him twice more
The f*ck I'm takin' your advice for?
When they cut mama lights off, I started sellin' white soft
It's ironic the nigga they tried to write off was takin' the league by storm, I'm kinda like Mars
Wake up in the mornin' to a blunted sour
Then I'm up in lust, I'm makin' money shower
You got money and respect, then you got f*ckin' power
I'm rich but I clap a nigga over a hundred dollars

Where I'm from, you keep the hammer tucked
Niggas is foul, f*ck around and get your nana bucked
Grimy niggas'll stick Santa though
Kill Rudolph, then eat 'em, you couldn't manage us
Why you think niggas is comatose?
Homie gave the other homie mama bag, now he got mad
Gotta kill 'em with the mag 'cause she overdosed
If I gotta box, it's the 52 or the rope-a-dope
Stuntin' in the drop
Plottin' on the lot I could build on
Cross me I'ma rock a nigga knot
I ain't thinkin' like your average nigga
I got carats off of carrots sellin' juice
Peaceful yet a savage nigga
You could lie about Cartel ties
Well I'm the type of guy to leave the Cartel tired Get the match and the gas, watch the Cartel dive
I'll catch 'em slippin' in the gym and let a barbell fly
Break his face with a plate like the ghost of Charlie Murphy
But I'm the real ghost, you ain't no Charlie Murphy
Not in the comedic way
I'm the one who make Paul and Peter pay
9 millimeter spray

What you know about the trap bein' slow 'cause the grams bad?
But the plug want his dough so you pay for your man half (I'll take care of that)
.44 Bulldog makin' your pants sag
I swim the swamp with a gator, I made it a handbag
They tell me I'm how hope look
Them pots had to slow cook
Stack of paper on my kitchen table look like notebooks
Two shooters with you? We know them niggas, they both puss
Roll through and I let this toast cook like Rosewood
Black Soprano family, I probably should make the movie
Pray over a brick while I'm slidin' a razor through 'em
Back to back trips now I got my bitch draped in Lou
I'm known for rock and a guitar like David Bowie
Yeah, I went against the FBI and crooked judges
When rappers start losin' limbs you know the Butcher comin'
Y'all still gassed off my rookie numbers
This the kid that's from a block that did Westside Gunn hoodie numbers
Uh, I grew to be a hustler but I ran with thieves (But I ran with thieves)
You steal from the gang, I bet your hands'll bleed
I met in a plug in the feds who used to hand me ki's
We was like Donovan McNabb and Andy Reid
Take me to your trap, I outta draft the plate
I f*ck around and put my signature on a bag of H
Y'all niggas usin' 12 12's and call it stackin' cake
When my niggas bag up, we usin' garbage bags and tape
Let's go, agh 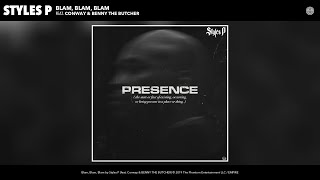