The Irony Of It All Lyrics

The Irony Of It All Lyrics


Hello, Hello. My names Terry and I'm a law abider
There's nothing I like more than getting fired up on beer
And when the weekends here I to exercise my right to get paralytic and fight
Good bloke fairly
But I get well leery when geezers look at me funny
Bounce 'em round like bunnies
I'm likely to cause mischief
Good clean grief you must believe and I ain't no thief.
Law abiding and all, all legal.
And who cares about my liver when it feels good
Wwhat you need is some real manhood.
Rasher Rasher Barney and Kasha putting peoples backs up.
Public disorder, I'll give you public disorder.
I down eight pints and run all over the place
Spit in the face of an officer
See if that bothers you cause I never broke a law in my life
Someday I'm gonna settle down with a wife
Come on lads lets have another fight

Eh hello. My names Tim and I'm a criminal,
In the eyes of society I need to be in jail
For the choice of herbs I inhale.
This ain't no wholesale operation
Just a few eighths and some Playstations my's vocation
I pose a threat to the nation
And down the station the police hold no patience
Let's talk space and time
I like to get deep sometimes and think about Einstein
And Carl Jung And old Kung Fu movies I like to see
Pass the hydrator please
Yeah I'm floating on thin air.
Going to Amsterdam in the New Year - top gear there
Cause I taker pride in my hobby
Home made bongs using my engineering degree
Dear Leaders, please legalise weed for these reasons.

Like I was saying to him.
I told him: "Top with me and you won't leave."
So I smacked him in the head and downed another Carling
Bada Bada Bing for the lad's night.
Mad fight, his face's a sad sight.
Vodka and Snake Bite.
Going on like a right geez, he's a twat,
Shouldn't have looked at me like that.
Anyway I'm an upstanding citizen
If a war came along I'd be on the front line with em. Can't stand crime either them hooligans on heroin.
Drugs and criminals those thugs on the penny coloured will be the downfall of society
I've got all the anger pent up inside of me.

You know I don't see why I should be the criminal
How can something with no recorded fatalities be illegal
And how many deaths are there per year from alcohol
I just completed Gran Tourismo on the hardest setting
We pose no threat on my settee
Ooh the pizza's here will someone let him in please
"We didn't order chicken, Not a problem we'll pick it out
I doubt they meant to mess us about
After all we're all adults not louts."
As I was saying, we're friendly peaceful people
We're not the ones out there causing trouble.
We just sit in this hazy bubble with our quarters
Discussing how beautiful Gail Porter is.
MTV, BBC 2, Channel 4 is on until six in the morning.
Then at six in the morning the sun dawns and it's my bedtime.

Causing trouble, your stinking rabble
Boys saying I'm the lad who's spoiling it
You're on drugs it really bugs me when people try and tell me I'm a thug
Just for getting drunk
I like getting drunk
Cause I'm an upstanding citizen
If a war came along I'd be on the front line with em.

Now Terry you're repeating yourself
But that's okay drunk people can't help that.
A chemical reaction inside your brain causes you to forget what you're saying.

What. I know exactly what I'm saying
I'm perfectly sane
You stinking student lameo
Go get a job and stop robbing us of our taxes.

Err, well actually according to research
Government funding for further education pales in insignificance
When compared to how much they spend on repairing
Leery drunk people at the weekend
In casualty wards all over the land. 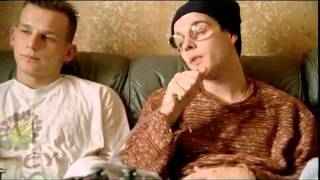