Hello out there we're on the air it's hockey night tonite
Tension grows the whistle blows-& the puck goes down the ice.
The goalie jumps and the players bump and the fans all go insane
Someone roars "Bobby scores!" at the good ole hockey game
Chorus:
Oh the good ole hockey game is the best game you can name
And the best game you can name is the good ole hockey game
2nd period:
Where players dash with skates aflash the home team trails behind
But they grab the puck and go bursting up and they're down across the line They storm the crease like bumble bees they travel like a burning flame
We see them slide the puck inside -It's a "1-1" hockey game!
Chorus:
3rd period: last game in the playoffs, too...
Oh take me where the hockey players face off down the rink-
And the Stanley Cup is all filled up for the chaps who win the drink-
Now the final flick of the hockey stick and a one gigantic scream-
The puck is in! The home team wins! The good ole hockey game!
Chorus:
repeat
3 times
He shoots he scores...
Explain lyrics
Correct lyrics 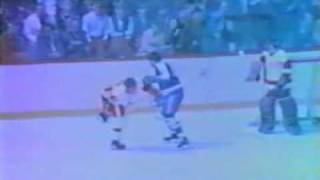