I'll tell you an old-fashioned story
That grandfather used to relate,
Of a builder and joining contractor
Who's name it were Sam Oswaldthwaite.

In a shop on the banks of the Irwell
There Sam used to follow his trade,
In a place you'll have heard of called Bury
You know, where black puddings is made.

One day Sam were filling a knot hole
With putty when in through the door,
Came an old man fair reeked i'whiskers
An th'old man said good morning I'm Noah.

Sam asked Noah what were his business
And t'old chap went on to remark,
That not liking the look of the weather
He was thinking of building an ark.

He'd got all the wood for the bulwarks
And all t'other shipbuilding junk,
Now he wanted some nice birds-eye maple
To panel the sides of his bunk.

Now maple were Sams monopoly
That means it were all his to cut,
And nobody else hadn't got none
So he asked Noah three ha'pence a foot.

A ha'penny too much replied Noah
Penny a foots more the mark,
A penny a foot and when rain comes
I'll give you a ride in my ark.

But neither would budge in the bargain
The whole thing were kind of a jam,
So Sam put his tongue out at Noah
And Noah made long bacon at Sam.

In wrath and ill-feeling they parted
Not knowing when they'd meet again,
And Sam 'ad forgot all about it
'Til one day it started to rain.

The houses were soon under water
And folks to the roof had to climb, They said t'was the rottenest summer
As Bury had had for some time.

The rain showed no sign of abating
And water rose hour by hour,
'Til th'only dry land were at Blackpool
and that were on top of the tower.

So Sam started swimming for Blackpool
It took him best part of a week,
His clothes were wet through when he got there
And his boots were beginning to leak.

He stood to his watch-chain in water
On tower-top just before dark,
When who should come sailing towards him
But old Noah steering his ark.

They stared at each other in silence
'Til ark were alongside all but,
Then Noah said what price yon maple
Sam answered three ha'pence a foot.

Noah said nay I'll make thee an offer
Same as I did t'other day,
A penny a foot and a free ride
Now come on lad what do thee say.

Three ha'pence a foot came the answer
So Noah his sail had to hoist,
And sail off again in a dudgeon
While Sam stood determined but moist.

So Noah cruised around flying his pigeons
'Til fortieth day of the wet,
And on his way home passing Blackpool
He saw old Sam standing there yet.

His chin just stuck out of the water
A comical figure he cut,
Noah said now whats the price of yon maple
And Sam answered three ha'pence a foot.

Said Noah you'd best take my offer
It's the last time I'll be hereabouts,
And if water comes half an inch higher
I'll happen get maple for nowt.

Three ha'pence a foot it'll cost you
And as for me Sam says don't fret,
Sky's took a turn since this morning
I think it'll brighten up yet. 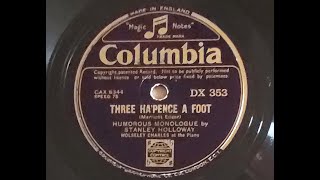