Albert And The Lion Lyrics

Albert And The Lion Lyrics


ALBERT AND THE LION
from the Stanley Holloway record
There's a famous seaside place called Blackpool
That's noted for fresh air and fun
And Mr. and Mrs. Ramsbottom
Went there with young Albert, their son.
A fine little lad were young Albert,
All dressed in his best, quite a swell.
He'd a stick with an 'orse's 'ead 'andle;
The finest that Woolworth's could sell.
They didn't think much to the ocean,
The waves they were piddlin' and small.
There were no wrecks and nobody drownded,
'Fact, nothin' to laugh at at all!
So, seeking for further amusement,
They paid, and went into the zoo,
Where they'd lions and tigers and camels
And cold ale and sandwiches, too.
There were one great big lion called Wallace
Whose nose was all covered with scars;
He lay in a som-no-lent posture
With the side of 'is face on the bars.
Now Albert 'ad 'eard about lions-
'Ow they was ferocious and wild;
To see lion lyin' so peaceful
Just didn't seem right to the child.
So straightway the brave little feller,
Not showin' a morsel of fear,
Took 'is stick with the 'orse's 'ead 'andle
And stuck it in Wallace's ear.
You could see that the lion din't like it,
For givin' a kind of a roll,
'E pulled Albert inside the cage with 'im
And swallered the little lad - 'ole!
Now Mother 'ad seen this occurrence,
And not knowin' what to do next, She 'ollered "Yon lion's et Albert!"
An' Father said "Ee, I am vexed."
They complained to an animal keeper
Who said "My, wot a nasty mis'ap;
Are you sure it's your boy 'e's eaten?"
Pa said, "Am I sure? There's 'is cap!"
The manager 'ad to be sent for;
'E came and 'e said "Wot's to-do?"
Ma said "Yon lion's et Albert,
And 'im in 'is Sunday clothes, too!"
Father said "Right's right, young feller-
I think it's a shame and a sin
To 'ave our son et by a lion
And after we paid to come in."
The manager wanted no trouble;
He took out his purse right away,
Sayin' "'Ow much to settle the matter?"
Pa said "Wot do you usually pay?"
But Mother 'ad turned a bit awkward
When she saw where 'er Albert 'ad gone.
She said "No, someone's got to be summonsed!"
So that was decided upon.
And off they all went to p'lice station
In front of a Magistrate chap;
They told what 'ad 'appened to Albert
And proved it by showing 'is cap.
The Magistrate gave 'is opinion
That no one was really to blame,
And 'e said that 'e 'oped the Ramsbottoms
Would 'ave further sons to their name.
At that Mother got proper blazin':
"And thank you, sir, kindly," said she-
"Wot, spend all our lives raisin' children
To feed ruddy lions? Not me!"
filename[ ALBLION
RP
===DOCUMENT BOUNDARY=== 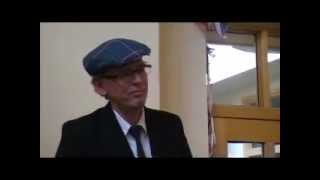 check amazon for Albert And The Lion mp3 download
browse other artists under S:S2S3S4S5S6S7S8S9S10S11S12S13