A few years back in an unknown place.
a little bull was born with a dark red face.
in a pen he was gentle,
but in the chute...a buckin' machine.

mind over matter keeps you on for eight,
but it doesn't matter when they open that gate.
for this living explosion with the dark red shell,
he'll give you a ride...through hell!

now every few years a man comes along,
he knows what he's doing and won't do it wrong.
he'll conquer the odds, he'll pass the test,
above and beyond...higher than the rest.
so what do ya do, when you've done it all.
you've climbed every mountain and jumped every wall.
well the chance comes along like a great big feast.
the chance for the hero...to ride the red beast. (chorus)
they said he can be beat, he's just one of the rest,
but he couldn't be tames, cause he gave 'em his best.
he's ready to go so don't be a fool,
he jumps like a rabbit and kicks like a mule.
he's quicker than a quarter horse, aggressive as a
hawk,
this mountain of muscle...red rock.

there were seven tough battles between the two gods,
and everyone thought the bull had the odds,
but the man had heart, and red finally lost,
four, eight second rides to the mighty lane frost.

now both of them retired in their own special way,
but they'll both be remembered every single day.
they had desire to win and the hearts to try,
red rock and lane frost...were two of a kind! 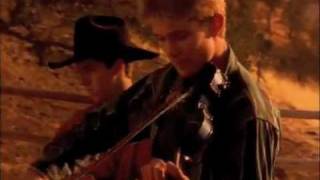