Brothers Beneath The Skin Lyrics

Brothers Beneath The Skin Lyrics


Preached the Archbishop, from his High Catholic pulpit
after the wine was thrilling, the cattlefax went raw
Inbred home of beauty, often those who do their duty
respect the king, respect the clock, in [...] law

The communist made an answer to this back-room in
p[...]by
Marx and Lenin open by the woodwritings on the floor
You've been preaching 'kingdom come' but your factory's
a slum
Is brewing such a trouble as we've never seen before!

They cried the town mechanic with a good booth
mechanicaly
"Oh, I am Heiland! Damn Thee! I'm the master of my
soul!"

My granddad was a peasant, and it wasn't very pleasant
without cinemas and birth-control and unions and the
dole

Straight out the bastard, eternal need for [...] A purple man take in your [...] been a half
Did you ever stopped to think as you drowned the sonic
drink
The the bombs who bruise the beach will have the last
among the last

Look what we have given them, calling guns a discipline
syphilis and alcohol and motorways for crips
Give and try the underwaves of emancipated slaves
they were doing very nicely till the white gods came in
ships.

Look! Dead Man! At this empire of suffering
[Manco dracona] of an idious color strand
They can hear it, try not healing, the thoughts fall in
concealing
the last whito is snuffed out in a toxic no-man's land 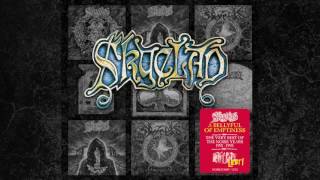