I still hear the screams of my lover torn from me
Still taste the salt of her tears on my face
As they left me for dying my shattered corpse writhed
On a pyre of anger - I choked on the stench of disgrace.
Flint and bone are all we wield
Against the might of Roman steel
While eagles stare with mocking eyes
Their legions cut us down to size.
R'Vannith, R'Vannith, R'Vannith she cried
As the last of her kinsmen fell dead by her side
Oh why could I not stand with my warrior queen
There to share sweet release in a death swift and clean?
From out of the wildwood they came down upon us
These olive-skinned butchers that shone like the sun
With hate in their dark eyes they robbed us of our lives
But left me to weep when the slaughter was done.
Invaders came to violate - to subjugate and legislate Put our homes and farms to fire to feed the greed of their Empire
R'Vannith, R'Vannith, R'Vannith I cried
As I grieved for the fallen - and wished I had died
I heard ravens laugh - stripping the flesh from her bones
Well fed by the Senate and People of Rome.
Two thousand years pass by - yet still they hold sway here
Their Empire is holy (its motives the same)
They have traded their spears for the cross that man fears
Those who nailed Him up high now rule in his name.
Invaders come to violate
To subjugate and legislate
Believing their forefather's crimes
Give them the right to twist our minds
R'Vannith, R'Vannith, R'Vannith we'll cry
When the last of our freedom is crushed by a lie
New legions of pious hypocrisy ride
To baptise us in blood (an unstoppable tide).
Explain lyrics
Correct lyrics 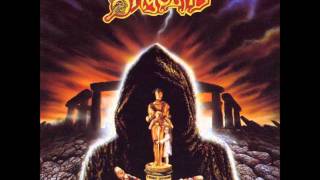