I'll Roll You Up Lyrics

I'll Roll You Up Lyrics


Tightly knit, my script is legit
I'm force feedin' competition, more rebel shit
Rhymes on a roll, cold yet bold
I did posse on Broadway in cruise control

Runnin' like a wart, rap's my sport
Of course loss, and then you pick the part
But don't cry and say you wasn't warned
'Cause my voice keeps comin' like a storm

Bass should it be let go, heck no
Want to be hard, 'cause you failed to be techno
Rugged, ripped and rough hittin' like thriller
(Boom)
My bass drum is a killer
Packed like a musket, tough to test it

You're arrested, you guessed it
(Yo, was he in a trial?)
His eyes are big, his crew ran away in the crunch
Then I hit 'em with the batman punch

Laugh, if you want but don't approach
Cause most that approach get ate up like toast
But some do come, you wanna scrap or what?
If not stay back, cause I'll roll you up

I'm scannin' the court, holdin' the fort
Runnin' your mind through a maze of pure lyrical tort
More real estate, keep my posse runnin' to the bank
It's hardcore, breakin' up armored tanks

Not dressed to impress but dressed for pain
No cute sweat suits, just sweat and chains
Step off strapped, I let off caps
Ha, Hitchcock couldn't write more wicked raps

Rip the godfather, then you start that braggin'
I never jumped on a James Brown bandwagon
A malla ralla, makin' mc's holler
My rope's so big, your girl's callin' me a baller

Bad is played, so I choose to use mean
Diabolical mind, the remorse is unseen
Quick to cut on any concert quack
Lip-synchin' rhymes off a raggedy tracks

He claims to hate me, swears I can't beat 'em
I drop a new jam, the punks come like I beep 'em
Tried to jack, stepped up and got popped
'Cause I'm takin' out scum like Robocop

All you players from coast to coast
You know I rock the most
My bank is thick but it's legal, so I boast
Comin at a brother like a in sync cheap

I'm still down to, if a sucker got beef
Roll him up, 'cause he's soft, kinda limp
I'm your worst nightmare, a sucker mc's pimp
Workin' 'em hard with my hip hop force

My words so cold they known to freeze up warts
The scope is focused, notice no hocus pocus
Your girl's a square but she'll tell ya I'm bogus
Saw you on the street, your middle finger was flippin'

And your the victim of a drive-by lyrical whippin'
Read my song, lyrics are strong
The critics were wrong, I kind to suckers like pong
Aggression the lesson, pain is the ultimatum

Reachin' and grabbin', hittin' like jack Tatum
They are crushed, turnin' suckers to slush
Heavyweight beef for you punks that fuss
Whippin' like handball, punishin' the face

I'm all up in 'em like section eight
Logical rhymes, ahead of the time
Goin' for mine and fight time, still down to grind
Here's the white chalk, you're next to get cut
But cross the white line and I'll roll you up

I'll roll you up
Bring it on down
(Sir, mix-a-lot)

I got my voice down pact, rock it up like crack
Smacked all the whack with a loaded pack
Black cross courts is the chosen attire
Heavy with the lyrics, all balls are fire

'Cause I'm, dope, are great
In the pacific time zone, I'm considered the boss
A lyrical nightmare, it's me in your dreams
Feel the sweat, the smoke, get up and then scream

Loose is the noose but I'm tightenin' soon
My drum's steady hung with enormous boom
I stomp all comp, for it's you I romp
My drum's kickin' harder than paternity stomps

Hit it and with it, the posse's heavy and stiff
Skirts on the tip for the player riff
Not a regular rapper, 'cause I'm knowin' what's up
You attack from the back and I'll roll you up 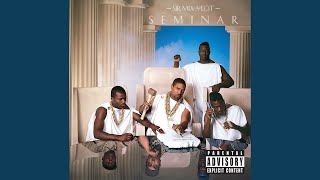