As we lay here, motionless,
Drenched in the foul tyranny of deception and blasphemy,
The deceased, the unsealed.

The angel descends, transfixing the darkness of our blackened heavens,
The absolution of mankind’s misery,
The despotic leviathan is cast into the darkness of the Abyss.

The epoch of our deliverance, our reprieve,
The martyrs resurrect, ascend from their final rest.

To reclaim their place at the side of the throne for 1000 years,
Ruling over this rotting earth, this empty shell of a world, And we, the deceased, the wretched unsealed, that inhabit it.

Until that day, the macabre awakening,
The leviathan bursts forth from his desolate tomb,
And we, the wretched, are defiled.

With a jarring malice in his eyes
And the martyrs blood in his voice,
He wages war on Heaven.

The abominable armies of the Kings
O this volatile Earth bay for annihilation,
And in a deathly chorus they scream:
'Heaven shall burn tonight…' 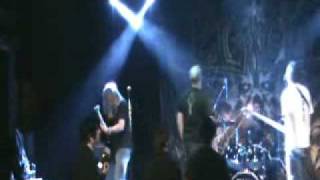 check amazon for The Reprieve mp3 download
these lyrics are submitted by kaan
browse other artists under S:S2S3S4S5S6S7S8S9S10S11S12