As blinding smoke smothers the sun,
From the wretched core of the volatile flames appeared the locust swarm,
Pouring out like a hateful ocean upon our frail flesh,
They came not to kill, but to bind and torture us,
The unsealed, the deceased.

With pain like that of scorpions,
The infernal roar echoes in our ears,
Long after we are deafened by the shattering resonance of this abysmal onslaught,
We pray for death.

With such sordid desperation that our blistered skin weeps blood,
Falling like rain from our irreparable flesh, But to no avail, suffocating in plagues of fire.

Smoke and sulfur poured out from the mouths
Of those who brought famine and death,
And once more the earth shatters in a violent seizure beneath our feet,
Claiming the lives of 7000, the lucky ones,
released from this vile torment,
And in a hallowed cadence of worship for the one Most High,
The heavens split in two, and with hurricane winds and splintering hail falling
Like shattered stars from the skies, our final storm begins… 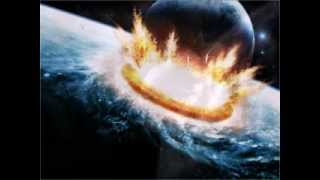 check amazon for Like Shattered Stars mp3 download
these lyrics are submitted by kaan
browse other artists under S:S2S3S4S5S6S7S8S9S10S11S12