Back in this muthaf*cka once again

[ VERSE 1 ]
Niggas watch your back cause here I come again
Rappin funky shit for the 199-trey
In 1989 I sold dope for a pasttime
1991 they called that nigga Scarface
Started on the team when a nigga turned 16
Stackin that green sellin dope to the dopefiends
Daddy seen a scheme, thou so it seem
Cause he hooked a nigga up with a nickel-plated triple beam
Had a lotta game with the beam, that's what it came with
Taught a nigga how to get to funk when it jump
If static jumped off, then I was down for the dirt
When puttin in work I ain't no muthaf*ckin punk
Down with my partners that a nigga f*cked around with
Huntin for some shit to get up into and we found it
If you had a problem with a nigga we was down with
We rolled by your set and shot your whole click down, bitch
Niggas play for keeps in the city that I come from
Niggas talk shit from out of town, but they don't want none
If you think you want some, then go ahead and come
It ain't where you at, you stupid bitch, it's where you from
And comin through my hood is where you findin all the thugs at
Lookin for some dope and they gon' show you where the drugs at
Lookin for some trouble, well, a nigga's gonna plug that
Niggas keep they pistols up underneath they rug mat
Show your little ass, go ahead and let your ass show
Talkin that shit, punk bitch, you better dash, hoe
Once I get it on it ain't no muthaf*ckin holdin this
Kinda f*cked up that I'm a nigga that be chauvinist
Niggaroe, the heater want this fool to let the trigger go
But bitch, I gots to give you one to let you niggas know
I'm lettin you bitches know

[ VERSE 2 ]
How a nigga back in the game I used to start shit
Moppin up the hood, makin muthaf*ckas squab
You f*cked with one nigga out of the muthaf*ckin click
You had to f*ck around with the whole f*ckin mob
Cause niggas rolled thick and they didn't take shit
Quick to put that ass up in a muthaf*ckin lynch
Whip it on your ass, then tie it up to a fence
And since we began it's been that way ever since My niggas used to kick it up around the f*ckin pikes
Smokin swisher sweets, drinkin Miller Lites
Takin turns heatin up the muthaf*ckin mic
And maybe beat a buster out his muthaf*ckin bike
Crackerjacks kept a muthaf*cka on the hustle
Makin sure my business stayed stead' trump tight
Hoes sell flippers, gave two for ten
And even gave up shake to keep my clientele tight
Before long I had customers out the ass buyin flippers
Bearskin coats, tight ropes and fat slippers
Fresh fade daily, I had my own f*ckin clipppers
And all kinds of hoes on my cocksuckin zipper
Hoes came in handy, but my money came first
Causebitches get aghost when they see a nigga's hearse
So if I ain't have shit I had a muthaf*ckin ???
And could pull on my dick if worse came to worst
So if you got a problem with the way I run my business
Let a nigga know, so I can put you in your place
9 times out of 10 you ain't man enough to deal with
The born killin, dope dealin Mr. Scarface
Rougher than a muthaf*cka, takin no shit from a
Busta muthaf*cka who be flexin off the bullshit
Got my bull pump on all you bitch-made niggas
So let a nigga know when you bitches wanna flip
I'm lettin you niggas know

[ VERSE 3 ]
I had to let you know I ain't that nigga you should toy with
So don't come in my face with that muthaf*ckin boy shit
Never comin soft with that 'love, peace and joy' shit
Mr., Mr. Scarface, the real deal McCoy shit
Sendin out a shot to all you busta-ass one times
Suck a nigga dick, or make a nigga rich
Cause you don't get props for what you doin for the cops
Except a swift kick and a mouth full of dick
Lettin muthaf*ckas talk ass about your gameplan
Just because you got a big gat you'se the same man
That used to get your ass kicked daily back in the neighborhood
Finally got a nigga back pushed like you said you would
f*ck it, I'm a nigga gettin down for his cash flow
Down to down a hoe, I'm lettin you niggas know
I'm lettin you bitches know

This is for the
Front, back and side to side

Sendin this out to all my muthaf*ckin partners 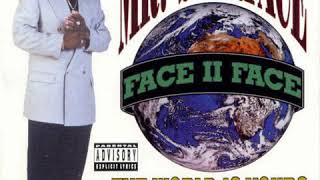