Pumpkins Scream In The Dead Of Night Lyrics

Pumpkins Scream In The Dead Of Night Lyrics (feat. Shinigami)


[Intro]
Gasper, what the hell you doin'?

[Verse 1: Savage Ga$p]
I just had to do 'em on my own shit
I just had to do her on some cold shit
I just got these bitches in my cold crib
Know you see me lookin' like a ghost, bitch
Ayy, like a ghost, bitch
I just seen 'em lookin' when I rode in
Ayy, on some ho shit
I just hit it once and then a ho dipped
Young Jack in a bad ho
I been in the cut, lookin' spooky in a black coat (bitch)
And she f*ckin' with my tats though
I don't know her name but I just know I'm finna clap though, ayy

[Verse 2: Savage Ga$p]
Look, and I been gettin' bands, no Green Days
I been f*ckin' beefed off a bean for a week straight
Gas, 93, hit a team play
Catch me in a graveyard, posted where the fiends stay, look
Ayy, and I'm up in her guts, no dessert, uh
Got these bitches jumpin' out they t-shirt
And I just got a chain for my bro
And I'm finna get my own, but my brothers gotta eat first Look, and I don't text hoes
I'll just send 'em out like strep throat
And I don't even really wanna fee
Shinigami told me, "Kill 'em," I said, "Let me grab my death note"

[Verse 3: shinigami]
October (bitch), it's a nightmare
Feelin' like Jack, I'm a king, you're a poser
f*ck out the way, if you see me, move over
If you can't hear me, lil' bitch, move closer (damn)
Yuh, and you can't see me, I'm a ghost
Got this smoke in my throat
Can't feel my face, I'm 'boutta choke ('boutta choke)
I been on the road, f*ck the pressure, I won't fold
I been chillin' with Gasper in Winterville, and it's cold
I don't listen for shit, I don't ever do what I'm told
That's why these labels are tired 'cause I just can't be controlled
I got chains on my body, lookin' part decomposed
Bloody ice on my wrist, like subzero, on froze, bitch (bitch)
Explain lyrics
Correct lyrics 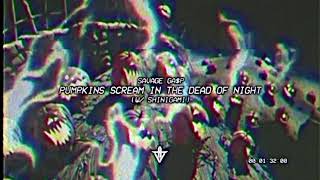 check amazon for Pumpkins Scream In The Dead Of Night mp3 download
these lyrics are submitted by fatih
browse other artists under S:S2S3S4S5S6S7S8S9S10S11S12S13
Record Label(s): 2020
Official lyrics by