The evening sun was sinkin' down, a chill north wind a-blows
The new plowed ground was coolin' fast, the river rolls and flows
Beneath the two lane concrete river bridge between my place
And town on that hot bed farm to market road they call 1291

I'm sayin' son you'll see me searchin'; sizzlin' down that broad highway
Dollar signs in both my eyes, I'm seekin' out my prey
I'm prayin', "Jesus, will you send me just another three or four?"
They pay two-fifty down in Hallettsville, 3 dollars, maybe more

And more than likely they'll be out tonight a-wanderin' from the farms
Waddlin' down 1291 to keep their bodies warm
I'm talking walkin' belts and neckties and boots for rodeo
They don't run too fast, don't waste much gas, I'm makin' lots o'dough

Look there's two of them a-walkin' down the line
I can't believe my luck tonight this here makes twenty-nine
And so he rolled the first one runnin', the second was too fast
His breaks and laughter squealin' as he stomped down on the gas

Good God, his car was sideways flyin'
When the bridge wall met his door
The impact shook the river bed
His foot went through the floor

Was his last moment from the bridge wall to the stream
From the speckled blood around his smile a-spewin' gasoline
And then he screamed his raspy epitaph before he turned to flame
They pay two-fifty down in Hallettsville, I ain't the one to blame 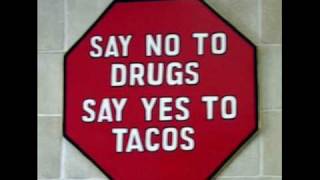