Me and the boy's we cinched up our saddles and rode to sonora last night
Gun's hanging proud, daring out loud for any one looking to fight
Card cheats and rustlers would run for their holes when the boys from the old broken O
Rode up and reined on the street that they named Sonora's death row

Inside Amanda's we was a dancin' with all of Amanda's gals
I won some silver at seven card stud so I was out doin' my pals
But the whiskey and mescal, peso cigars drove me outside for some air
Somebody whispered "Your life or your money", I reached but my gun wasn't there

I woke up face down in Amanda's back alley aware of the fool I had been Rushed to my pony, grabbed my Winchester and entered Amanda's again
Where I saw my partners twirling my pistols and throwing my money around
Blinded by anger, I jacked the lever and one of them fell to the ground
Amanda's got silent like night in the desert, my friends stared in pure disbelief

Amanda was kneeling beside the dead cowboy plainly expressing her grief
And as I bowed my head a trembled shot through me my six-gun was still at my side
I felt my pockets, there was my money, I fell to my knees and I cried
A nightmare of mescal is all that it was for no one had robbed me at all
I wish I was dreaming the sound of the gallows they're testing just outside
The wall 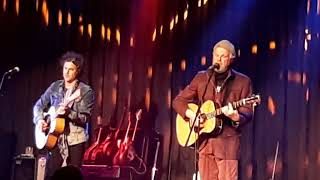