It's three men from Chile who are tired and they want to go home
They've run out of money and they're stuck up in east Oregon
So you give ?em the small bit of change in your hand
You try to speak Spanish but they don't understand

It's a statue of Jesus your grandmother had when she died
All cracked and all yellow and you know you should throw it aside
But you're growin' religious, the older you get
You haven't been saved but it could happen yet

It's a bus stop, a street cop, an old dog, the new kid, a bum
It's fright and rejected, neglected and blind, deaf and dumb
But you look in the mirror and you're still hanging in
It?s there to remind you how lucky you've been

It's a lonely feeling, now and again
It's only a feeling that comes now and then
Explain lyrics
Correct lyrics 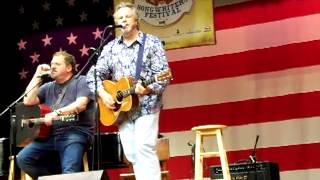