Outside the chip shop Thaddeus Wagstaff fractures my cheekbone;
3 empty cans of Castlemaine XXXX
Go rolling down my trouser leg
Blood, snot and curry coalesce in the corners of my nails
My friends drifting away from me

Attempting to penetrate a coconut husk with a Philips-head screwdriver
I pierce a hole straight through my hand into the laminate worktop It's a major operation to repair a damaged tendon;
I come around with the tube still down my throat
The milk of amnesia fills my cup and back into the hole I go

Snoring like a pan of broth, I arouse the ire
Of my fellow patients
Wagging their ladles in the dark

My bedroom walls are papered with the stripes of Newcastle United
Between which I perceive the presence of a horse-headed figure
Holding aloft a flaming quiver of bramble silhouettes
He is the King of Children
Singing like a boiler: 'Tomorrow is on its way' 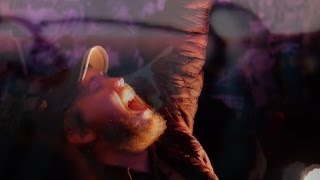