[Spoken]
"Marry Freddy." What an infantile idea. What a heartless,
Wicked, brainless thing to do. But she'll regret, she'll
Regret it. It's doomed before they even take the vow!

[Sung]
I can see her now, Mrs. Freddy Eynsford-Hill
In a wretched little flat above a store.
I can see her now, not a penny in the till,
And a bill collector beating at the door.
She'll try to teach the things I taught her,
And end up selling flowers instead.
Begging for her bread and water,
While her husband has his breakfast in bed.
In a year, or so, when she's prematurely grey,
And the blossom in her cheek has turned to chalk.
She'll come home, and lo, he'll have upped and run away With a social-climbing heiress from New York.
Poor Eliza. How simply frightful!
How humiliating! How delightful!
How poignant it'll be on that inevitable night
When she hammers on my door in tears and rags.
Miserable and lonely, repentant and contrite.
Will I take her in or hurl her to the wolves?
Give her kindness or the treatment she deserves?
Will I take her back or throw the baggage out?

But I'm a most forgiving man;
The sort who never could, ever would,
Take a position and staunchly never budge.
A most forgiving man.
But, I shall never take her back,
If she were crawling on her knees.
Let her promise to atone;
Let her shiver, let her moan;
I'll slam the door and let the hell-cat freeze!

[Sung]
But I'm so used to hear her say
"Good morning" ev'ry day.
Her joys, her woes,
Her highs, her lows,
Are second nature to me now;
Like breathing out and breathing in.
I'm very grateful she's a woman
And so easy to forget;
Rather like a habit
One can always break-
And yet,
I've grown accustomed to the trace
Of something in the air;
Accustomed to her face. 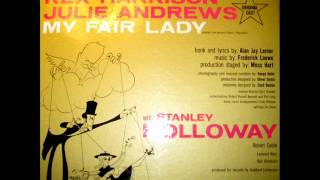