Down so long, I forgot that up exist
I ask God, "Why do I even exist?"
Mad at God when I should've blamed myself
20's gone, time to focus on the next
30 years and I don't know what to expect
Took that long for me to see that I was blessed
2015, y'all just don't know how I felt
What that shit could do to someone's mental health
2019, Xanax almost took me out
Could've never got to see my daughter smile
Used to hold my childish ways, I put 'em down
No more self inflictin', let's just stick around
I got songs that I had put out in my name
Turn them records on a day I feel ashamed
This goes out to all that ones that's tryna change
Don't let anybody tell you that you can't
Yeah, not the same, changed man, stay on your grind
New commandments, givin' up? That's a sin
Times was hard, I been through it all
I did not understand though, look at God
We got through it all, still here, still standin'

[Sy Ari da Kid:]
Pick up gains, I'm in L.A fitness [?], yo
Still standin' like it ain't no seats left, yo, I'm a clean mess
With this pimpin' I could sell a bit like I don't need sex
And I mean that, yeah, [?] beat his chest
You know in the school of hard knocks, ain't no teachers pet
In the ocean I'm a shark though, I don't need no breath
I just made it to the next level, I ain't see no steps, yeah
That boy ain't pay his dues, you know he in debt, yeah
I be wide awake at night like I don't need my rest
[?] rollin' up with cookies, Keebler elf
I'm so used to doing shit alone, don't need no help, no
Only competition I see is me and myself
Just spent a G on my belt, why would I be on a shelf?
Can't see no one else, shoot the 3 like I'm Tony Delk
Sometimes I think being lonely helps 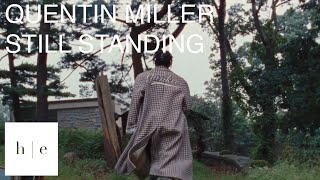