[Verse 1: Pouya]
The top ain't lonely when your homies rich and loaded with motives
And movin' forward when f*ckin' bitches get borin'
Lose crowd control when I'm tourin', yuh
What the f*ck should I do?
I made a mess of my coupe Deville with these white bloody shoes
And I got nothin' to do (Yuh)
f*ckboy, do you really know who you talkin' to?
Make ten bands when I'm walkin' through
That money gon' make me stronger too
That bitch take my dick longer too now that I made it
Gotta hold it down and triple up on my savings
And burn it all in your faces

[Verse 2: Shakewell]
Okay, just microdose
Dope be smokin' up, another pill, who got a pint to pour?
Boobie called me, said he in the hills with Pouya tryin' to record
Shawty say she worried, way I'm livin' like I'm tryna go
Shawty, don't be stupid, 'cause the truth is we all dyin' slow
I just pick my poison different, what's your medicine? Alcoholic bitches doin' coke, amphetamines
I be snortin' thirties like they discontinued and
When I hear the choppa rumble it just sound like violin
It's a sad song that it sing
Heard that he want smoke, now he ended up on a tee
Pouya say, "Go drop the eight," but it ended up sixteen
Then I hopped up into my bag, dropped a thirty-two for the team

[Verse 3: Boobie Lootaveli]
In Miami, I tote choppas, Australia, hold koalas
Feedin' kangaroos, now I'm back to tear the block up
I can't see you p*ssy rappers through these hater-blockers
I will call the hit, and I hit you like, who shot ya?
Boobie with the looted loot, socks up like a fool
In L. A., me and Pou' hit up Shake' like, "What it do, mane?"
Mansion on the hills, the jacuzzi, not no pool, mane
Bruce Willis asked me for a pic' in Hollywood, mane 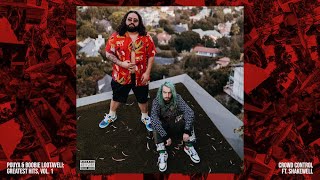