Here's my moral, plain as day
Old Man Atom is here to stay
He's gonna hang around, it's plain to see
But, ah, my dearly beloved, are we?
We hold these truths to be self-evident
All men may be cremated equal

The science guys, from every clime
They all pitched in with overtime
Before they knew it, the job was done;
They'd hitched up the power of the gosh-darn sun
They put a harness on Old Sol
Splittin' atoms, while the diplomats was splittin' hairs . . Hiroshima, Nagasaki -- what'll we do?
Hiroshima, Nagasaki -- they both went up the blue

Then the cartel crowd put on a show
To turn back the clock on the UNO
To get a corner on atoms and maybe extinguish
Every darned atom that can't speak English
Down with foreign-born atoms!
Yes, Sir!

But the atom's international, in spite of hysteria
Flourishes in Utah, also Siberia
And whether you're white, black, red or brown
The question is this, when you boil it down:
To be or not to be!
That is the question. .
Atoms to atoms, and dust to dust
If the world makes A-bombs, something's bound to bust

No, the answer to it all isn't milit 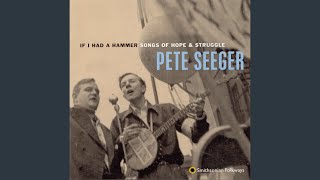