Now way down in the valley lived a farmer and his wife
The wife was makin' with the pastry with her fists and a knife
She cut a fancy little figure and she slapped it in a pan
Sayin‘, “Ain't he cute? My little Gingerbread Man!”

So now he's running up the road and headin' straight for the corn
And there's Little Boy Blue just a-blowin' his horn
Little Blue he drops his axe and screws his eyes up tight
He says “That ol' corn liquor must be messin' with my sight!”

Now Ginger says, “There's nothin' wrong with your two eyes.
You're lookin' at the coolest creature runnin' on two thighs
I run away from my ol' lady and her bakin' pan
And I can run away from you cause I'm the Gingerbread Man

He was about to sit himself and get a bite to eat
When the fat bartender said, “Get outta that seat!”
“I don't serve no biscuits here in my place,
But my big belly says it's hungry so I'll eat your face!”

He heard the feet pounding powder all along the ridge
And now he's looking fran-ti-cally for the nearest bridge
He heard a mumbly grumbly voice coming up from the ground
And Mr. Alligator said, “I'll see you safe and sound.”

“Just jump up on my back, Jack! We'll set sail!
I'll bet you never had a ride upon a gator's tail-“
“If you will promise not to eat me,” said Gingerbread
I'd even take a ride upon an alligator's head!”
“But you must swear it, Mr. Gator!”
“I cross my heart!”
And so he hopped upon his head and Gator did depart

About the middle of the river Gator rolled his eyes
He said, “Yo, Mr. Breadman, I must confide
That there's a price you gotta pay me for this here ride
So when I open up my mouth you'd better climb inside.”

Ginger cried, “Lordy Mighty! But you promised me!”
And Gator said, “A gator be what gators gotta be!”
And then he opened up his choppers sayin' “Well, bless my soul!”
He took the Rappin' Gingerbread Man and swallowed him whole
He ran his tongue around his gator lips with a slurp
And then his gator belly gave a giant gator burp
He gave his mighty tail a flip, gave a contented sigh
He grinned a nasty little grin and then he did cry, 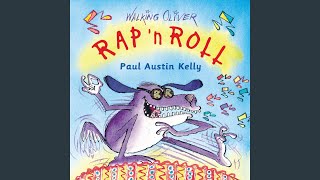