Seen'im peeking out from under Momma's magazine
He's grinning like a lunatic and looking mighty mean
He's got a shell of iron and two wings of neon green
He's the biggest ugly cockroach that I have ever seen.

I'm dashing to the closet 'fore ol' ugly gets away
It's where I hide my stash for keeping ugly bugs at bay
I'm flinging wide the door and leaping hot into the fray
The only way to keep the peace is making pieces of your prey.

I'm on a great safari, pith helmet and spud gun
I'll bid him sayanari, I've got him on the run.
I ripped that magazine away and shot him with a spud
Old Ugly skittered out the door, that bullet was a dud
I jumped up and tore after him, screaming for his blood
Old Ugly skittered back inside, I landed in the mud.

I'm tracking mud and anger all over Momma's place
The mud is on my feet and the anger's on my face
Revenge is such a cold dish, I'll give that bug a taste
Add in my own relish when I've laid him all to waste. Goin' on a bug hunt like you've never seen
Have a Boogy Buggy Bar-B-Que, pick his bones clean
Goin' on a bug hunt, you know it's sad but true
Bug has each got six legs, I only got two.

After half an hour I got'im cornered in my room
I'm feeling pretty jazzed as I pick up the nearest broom
I can almost see him sweating as he contemplates his doom
But just as I'm about to put that critter in his tomb,

I'm suddenly aware another sound's been going down
It's got a steady beat, a kind of military sound
It's pounding in my ears but it's coming from the ground
I fling my broom onto the floor and fast as lightning whirl around,

And now at last I see them in their camouflage attire
Pouring from the woodwork, from the muck and from the mire
There must be half a million bugs, an army just for hire
And Mr. Ugly there behind shouts the order, “READY? FIRE!” 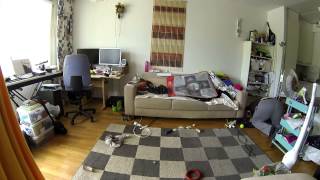 check amazon for Bug Hunt mp3 download
these lyrics are submitted by BURKUL4
browse other artists under P:P2P3P4P5P6
Record Label(s): 2003, P A Kelly
Official lyrics by