In the beginning back in nineteen fifty five
Man didn't know 'bout a rock 'n' roll show,
And all that jive
The white man had the schmaltz,
And the black man had the blues
No one knew what they was gonna do
But Tschaikovsky had the news, said

And it came to pass, that rock 'n' roll was born
All across the land every rocking band,
Was blowing up a storm
And the guitar man got famous, The business man got rich
And in every bar there was a superstar,
With a seven year itch
There was fifteen million fingers,
Learning how to play
And you could hear the fingers picking
And this is what they had to say

One night in a club called the Shaking Hand
There was a 42 decibel rocking band
The music was good, and the music was loud
And the singer turned and he said to the crowd 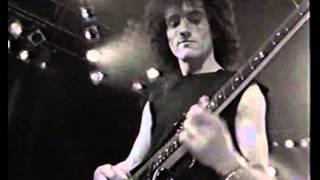