[Verse 1]
When you enter my house of worship
Ya crucifix I doubt it only Christianity
Y'all recognize this my man Christ album
Flip the pages of Isis Papers killin' racist
Federal agents, roll up rockin' masks with they techs
Computer matrix classified access throw on ya gas mask
The devil's bash flash reflected off the lights gats blast
(Hopes to those) Leavin' ya inner deep with ya chromosomes blown
Roamin' the catacombs of the phantom zone
(Ask yourself) How can we obtain true equality
When the value and price of life is less than technology?
They tryna call this a civil-ization
But what the hell is civilized about buildin' weapons and space stations
Cease and just call it what it really is
A technologically barbaric society like the Ancient Romans
I see the writing on the wall
The devil killed the righteous man
but now the rest'll take the savage beast to war

[Verse 2]
Remember rules of ancient, crusty like basements, study like spaceships
Ain't no probin' wid metal processors temperature placements
Teeth of a dragon, face of a lion
Children of Zion half bleeds who defacate iron
Burnt in flames we firin' robots and the bible insane
Unknown intelligence son to the sun we're astral residents
Bigger than rap let's make this album decadence
Turn mass to energy, medicine and telepathy, conspiracy, Tel Aviv Buildin' the food pyramid type heart with the left plate
Confess stay, raw like stones on my breastplate
It seems to me they all had hands in Nazi thievery
It's ninety six brothers use brains at low frequencies
One time for sharp kids, killers do biblical
There's two ghettos, one in the mind, the other physical
Break through, I be on the search for other niggaz
Race haters and prostitutes just as sinful as jail niggaz

[Verse 3]
Accept the phat beats that's filled with ghetto philosophy
Beatlovers and derelicts plus servant stenographers
The way they take my words to the throat and dictate 'em
To they man, like they was in the lab and just made 'em
From scratch but we can catch you on that parade
Cause in the end you sound like wax
That ten other emcees made
I'm throwin' shade to the willow
When you weepin' on the pillow
We'll know when it's time for finger prints
To be rubbed out with Brillo skills
Go through changes includin' cats that rearrange 'em
So if you hold my skills for ransom better kill 'em fore I claim 'em
I don't see Jehovah tellin' you that it ain't over
My carb take the eye of the storm, through this soldier
Sworn to defend the faith rap monk in New Tibet
If you want the holy doctrine tell 'em we this crew to get
Now who's next, uh, it's Non-Phixion, Non-Phixion
Explain lyrics
Correct lyrics 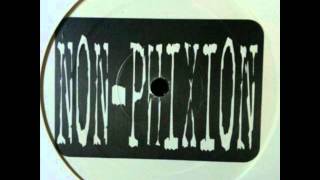