(Verse 1)
Suicide bomb, from Al-Qadea to the Koran
Represent your clique and our jihad,
banging from god to enron
Bin Laden is still CIA
John Walker captured in Kandahar, Afghanistan with shit stains on his face
I seen the planes hit the world trade then I seen the world change.
Idealogical earthquake
Explodin' on the same streets where the prophets increase
Walking on water, now I be throwin' rocks at police
(Verse 2)
I'ma ride til the sun and the earth collide
You'll be the first to hide
My words hurt and they burn inside
I'm the terror yo gimme my space
Got the matches and the spray can up in your face,
Like AAAAHHHHHH
Third degree, word to me
Gun under my shirts so you kids can't see
Man swervin', Camoflauge, kid with the turban
Jihad all-star, nice off the bourbon
(Verse 3)
If I gotta go to war, then I'm gonna for delf
Get my joint from the top of the shelf and get prepared
a nigga only got one life but i ain't scared
praying to the lord of the sky to take me there,
I see a lot of bullshit, a lot of f*ckin drama
Chop a niggas head off, don't let me get Osama
Suicide bomba, I'll go with those, f*cked up clothes, the mother f*ckin life i chose.
(verse 4)
Niggas say I'm crazy cause i travel by airplane,
ever since 9/11 shit f*ckin changed
nothin's the same
the sky is red
my eyes is red
but i'm still here
First we lost Pun, then we lost Aaliyah, then the terror came, made the twin towers disappear.
Flip to CNN, sit down and analyze it,
it's like i look at the city and i don't recognize it
Keep your head up if you lost a loved one
Big psyche, from the streets i spit for my thug one
(Verse 4)
Moo,
Now look up at the problems we facin, starvation, paying for your edu-ma-cation
Now I gotta worry about
Dyin on a plane
Things change for the seasons for too many reasons
A million and one for thievin, breathing and dying to breath
All the greed they supplying
Yeah I see it, but I see it for real
Niggas that squeal, niggas that won't, niggas that deal
(Verse 5)
Kids from that other shit, sitting on 20's, my shit's heavy
Suicide bomb, go off in the bathroom at Denny's
Drug connect, above specs I'll flex at the Emmy's
Stop reppin' your set, knowin' you gettin stressed for pennies
doin a buck twenty, crackin open a barrel of coke,
A billionaire with oil and guns, checked to provoke
I'm on the edge, and these new pills are made by the feds
Another setup, one to your face, wires taped to your head
(Verse 6)
From the alcholics, drug addicts and heroin fiends
since the twins came down i don't remember my dreams
A terrible means, im on the darkness, we pump the hardest
Wars in other lands over who and what your god is.
Regardless of the facts you spit out the tube,
Like the only anthrax we ever knew was the group
Proof is proof bitch I ain't afraid to fly
Streets are war, peace or war I ain't afraid to die
(verse 7)
It's my honor dog,
One time, gotta defend it
Whether your malcom or martin gotta do something to win it
Must do something to win it
So this empire strikes back
Pack that chrome because they send fire right back
Back at home, know where you live and you play at
North south east west, they know where your kids and your lady at
Rephrase that, how you live in the days,
When your sins are displayed and your spirit flys away, black?
Explain lyrics
Correct lyrics 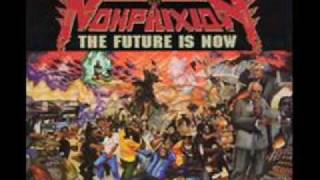