[Verse 1: Nas]
Yo, yo, I live it and I speak it
My religion is reefer
Big money in most, an uninhibited freak to sleep with
My visions are realistic, nothing's figurative
I can wish it into existence, God want this nigga to live
Blunt big as a dread, I get high and forget who bled
Who we stomp-kicked in the head and who we left for dead
Who are you niggas? Why argue niggas?
The truth is the truth, I really put my scars on niggas
They wait a lifetime, they tell they hoes, "Nas did this"
Pointin' to they scars like, "Right here, baby, really Nas did this"
Like a badge of honor, not braggin' I'm just honest
War stories we tell them, nothin's realer than karma
Sip prohibition liquor, prohibition whiskey
Rap Jack Demsey, Matt Black Bentley, pimply
Shatterin' your silence, pass around the chalice
Due to my Indian ancestry at the weed dispensery
Official kings and gents is who I mix and mingle with
f*ck your ice, I rock rubies, amethyst
I f*ck your wife cause she a groupie, scandalous
This for my bad hood bitches, ghetto glamorous

[Verse 2: Nas]
At seventeen I made seventeen thousand livin' in public housin'
Integrity in tact, reppin' hard
They askin' how he disappear and reappear back on top
Sayin', "Nas must have naked pictures of God or somethin'"
To keep winnin' is my way like Francis
As long as I'm breathin', I'll take chances
A soldier comin' home, twenty years old with no legs
Sayin' there's no sense to cry and complain, just go 'head So much to write and say, yo I don't know where to start
So I'll begin with the basics and flow from the heart
I know you think my life is good cause my diamond piece
But my life been good since I started finding peace
I shouldn't even be smilin', I should be angry and depressed
I been rich longer than I been broke, I confess
I started out broke, got rich, lost paper then made it back
Like Trump bein' up down up, play with cash

[Large Professor]
My nigga's like a locomotive
Nas, we push it, mush 'em
Queensbridge to Bushwick
Harlem, Bronx, all that
You ain't even supposed to be out here
You know where you at?

Verse 3: Nas]
At night, New York, eat a slice too hot
Use my tongue to tear the skin hangin' from the roof of my mouth
Shit was Falicimo, melted pot, city sweltering hot
Staggerin' drunker than those cops that 2pac shot
I was a crook by the train with that iron thing, concealed
Reachin', soon as I heard them iron wheels screechin'
When it came to a halt whoever walked off got caught
Toker man safe behind a locked door for sure
Minor theif shit, minor league shit, beastin'
Lookin' for the young, but now we older chiefin'
In my truck, play The Greatest Adventures of Slick Rick
Buggin' on how his imagination was so sick
It's ghetto beef, sinister niggas snicker through yellow teeth
Alchohol agin' my niggas faster than felonies
How dare I? Must be, somethin' in the air that corrupts me
Look at my upkeep, owned and sublease
I'm here y'all 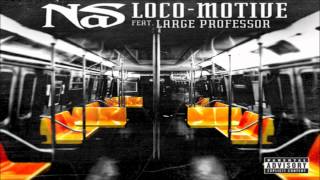