[R. Prophit]
We rappers in the slums.. alright..
Let's get this motherf*cker crunkin from Kentucky to Baghdad
Ya pops was always gone but that didn't make him a bad dad
We still managed to eat, and come to think wattn't half bad
But Doug was always humerous bout the things they would never have
Now I was born in Oakland better known as the Cold Town
Done seen too many folk down, some put the soul down
Done heard my momma cryin if I knew what I know now
I'd pro'ly have to greet the party room with the fo' pound
I'm tryna keep my head on straight to keep me from catchin
in case I feel my insides burnin, musta swallowed all twenty-eight
I'm drinkin milk with magnesium, but still I ain't feelin straight
Some mo' had murdered my granddad over real-estate

[Big V]
Puffy, if I put it out - sucky, if I pull it out
Ohh me, ya better kick it out, or ya livin in a haunted house
Ran how you tried to run, came how you tried to come Did what you couldn't do, difference between me and you
Slum for a while now, country for a lifetime
Cool is what I choose to be, but that ain't what I used to be
Muddy waters couldn't drown a nigga, bloodhounds on the trail for real
Shakin up this rap shit, givin niggaz hell for real
Turn a hold the dog deal, mucus and you hearin right
National Geographic ain't, f*ckin with this wildlife
Hissin; I'm finna strike, rattlin; I'm finna bite
Hell with a blue light, f*ckin with no rooms tonight! 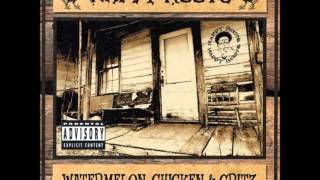