We are roaming the sky, inroad the gates of lies ATTACK!
A mighty clash, the gate is crushed.
Demons, dragons, angels flush.
Slaying the holy, bringing the weak christians to eternal
sleep.
I see Erin falling for a sword, he dies, I scream with
hatred in my eyes.
I roar like thunderstorms, I swear I'll avenge him
tonight!
The resistance is strong but we stronger, the blood is
now draining the earth.
Feeble screams of human beings, the Christian race is
devastated.
As I'm slicing angels with my sword, Eldon's troop is breaking through the next door.
Angels are burning in the flames, I laugh with my sword
sustained.
But still there's much left to fight, we're awaiting the
masterdemon to come.
"Nidas, make your hordes prevail, we have to win before
the sun's first rays..."
"We will win tonight, whe sun will never again shine!
Now the gates are crushed, but many we have lost..."
So rise, rise, army of the night. Now it's time to end
this feeble light.
Die, so die servants of the light. Jehovah is dethroned,
only fire will shine... 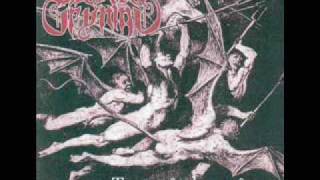