Third Bruce: How are you Bruce?

First Bruce: Well Bruce, I heard the Prime Minister use
it. "It's hot enough to boil a monkey's bum in here,
your Majesty," he said and she smiled quietly to
herself.

Third Bruce: She's a good Sheila Bruce, and not at all
stuck up.

Second Bruce: Here! Here's the boss-fellow now! - how
are you bruce?

Fourth Bruce: 'Ow are you, Bruce?

Third Bruce: How are you, Bruce?

Fourth Bruce: Gentleman, I'd like to introduce man from
Pommeyland who is joinin' us this year in the
philosophy department at the University of Walamaloo.

First Bruce: Is your name not Bruce?

Michael: No, it's Michael.

Second Bruce: That's going to cause a little confusion.

Third Bruce: Mind if we call you "Bruce" to keep it
clear?

Fourth Bruce: Gentlemen, I think we better start the
faculty meeting. Before we start, though, I'd like to
ask the padre for a prayer.

Second Bruce: I'd like to welcome the pommey bastard to
God's own Earth, and remind him that we don't like
stuck-up sticky-beaks here.

Second Bruce: Those are all cricketers!

Second Bruce: New-Bruce, are you a Poofter?

Fourth Bruce: Are you a Poofter?

Fourth Bruce: No. Right, I just want to remind you of
the faculty rules: Rule One!

Fourth Bruce: Rule Two, no member of the faculty is to
maltreat the Abbos in any way at all -- if there's
anybody watching. Rule Three?

Fourth Bruce: Right, that concludes the readin' of the
rules, Bruce.

First Bruce: This here's the wattle, the emblem of our
land. You can stick it in a bottle, you can hold it in
your hand.

Immanuel Kant was a real pissant
Who was very rarely stable.
Heidegger, Heidegger was a boozy beggar
Who could think you under the table.

And Wittgenstein was a beery swine
Who was just as schloshed as Schlegel.

There's nothing Nietzche couldn't teach ya
'Bout the raising of the wrist.
Socrates, himself, was permanently pissed.

John Stuart Mill, of his own free will,
On half a pint of shandy was particularly ill.

Plato, they say, could stick it away--
Half a crate of whiskey every day.

Aristotle, Aristotle was a bugger for the bottle.
Hobbes was fond of his dram,

And Ren Descartes was a drunken fart.
'I drink, therefore I am.'

Yes, Socrates, himself, is particularly missed,
A lovely little thinker,
But a bugger when he's pissed. 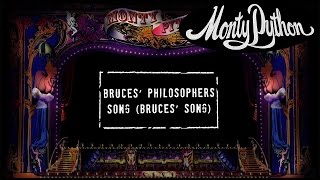