M.c. Space
Mc Shan
The Bridge Living In The World Of Hip Hop Give Me My Freedom Down By Law Left Me-lonely Back To The Basics Walking On Sunshine Kill That Noise Beat Biter Jane Stop This Crazy Thing
Mc Shan wiki M.c. Space video Mc Shan twitter


[sounds of a spaceship landing]

[VERSE 1: MC Shan]
Where I come from, we never heard of bite
We can write the freshest rhymes at the speed of light
All my planet, we're the real McCoy
And it's you Earth MC's that I wish to destroy
When I rhyme I'm never out of place
I take you on a voyage to outer space
Every rap I make, you know it always sells
I fly the galaxy wearin laser Cazels
I can fly from place to place quicker than you can snap
I'm known as the space wizard of rap
Depend on how I feel, if it's only for fun
I take my mic off of 'kill' and I set it to 'stun'
Sometimes my rhymes do inflict pain
Sends electrical impulses through your brain
In your Earthling ears my rhymes are caught
Transmitted to your brain is what's known as thought
I can see the devastation as I look in your face
Listen to how the deejays rock up in space

[VERSE 2: MC Shan]
To call yourself MC, are you out of your mind?
You have to have a golden voice similar to mine
But when you have a jam that is cold set
You play the same old records, one right after the next
For you to win the battle, Earth will have no chance
With the spinning of two records, and you call that advanced?
To do that on my planet you'd be taking a risk
Because the beats we play out live, and that's not on a disc
The first time that they see it, they might be amazed
And say, "Why should we commit ourselves to permanent waste?" That's why it is impossible for us to lose
Plug in the microchip of any beat that we choose
One thing where Earth and my people might match
That is the similarity and sound of the scratch
We have stamina, and also have poise
The only difference is our scratch is no sonic noise
To take Earth MC's out is what I wish to achieve
Once this is accomplished I be destined to leave
When I leave they'll call me an ace
That cool MC from outer space

[VERSE 3: MC Shan]
Although my color just might be green
I'm the flyest space MC that you ever seen
It might be in your future cause it can't be your past
But the reign of Earth MC's don't have too long to last
All you fresh MC's, you should feel ashamed
The wack around the world, you put em down with the game
They get on the mic and be coppin a plead
About how good they rock on the m-i-c
On my planet you must take a test
I'm at the top of my class because I'm the best
I use my rhyming skills for what it is worth
That's why I'm here to battle all MC's of Earth
If you take me out which ain't been done before
You might just start a interplanetary war
The war won't be to kill John and Steven
The whole point of it is to get even
The war's to get even, I will say indeed
And I will come back every year till the day I succeed
I hope I didn't stand here and offend you too much
If you ever wanna battle, then get in touch
So I can come back and dis your face
Pick up the telephone and dial MC Space 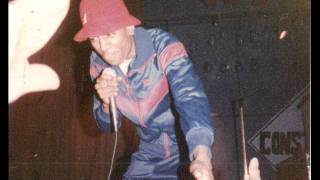