I Ran The Game Lyrics

I Ran The Game Lyrics


[VERSE 1]
A lil' lil' to make the ladies scream
This story is all about a tag team
The plot of the game was to jerk me
One would wind me, and the other would work me
These two were livin life triflin
To the point you would wanna get a rifle and
Blast their brains all the way to oblivion
Sweet Polly Pure and her homegirl Vivian
I first met em in the state of Wisconscin
When I caught ol' Vivy sneakin a peek at my Johnson
You could see that shine on my fronts
I said, 'Go for it, pal, cause you only live once'
I threw a quick glance at ol' Vivy
And she gave the eye that everything was splivy
The moment had arrived, I didn't wanna waste it
All choked up cause my eyes were pasted
On the bumps between her neck and her waistline
And I knew I had to hit her with a bassline
I said, "I'd like to introduce me"
But I wasn't about to let ol' Polly and Vivy juice me
She said, "I seen you clockin us
And I bet that you were thinkin 'bout knockin us
But if you had the chance, now would you?
Better yet, my man, now could you?
I said, "I'ma tell ya, no sense lyin
I be damned if I didn't die tryin"
She said, "I'm just kiddin, and we don't do that"
And I said, "Sure, what train runs through that?"
Like a prospector stakin his claim
You mighta been dealin, but I ran the game

[VERSE 2]
Now Polly wasn't into any regular ritz
With that big bold ass and them rhinestone tits
Just lookin at Vivy had me comin in excess
All I seen was horses on the plains of Texas
I asked them if they knew a place that I could rest at
Kinda hopin they would suggest that
But I still had doubts
And they said, "Come on over to our house"
"Then it's to your place we step to
Here comes my ride, yo James, what kept you?"
I can still see the faces like a snap shot
Like they musta hit the jackpot
I could see em just sneakin and canivin it
The car was borrowed and my homeboy's drivin it
Some freaks, me and James drived past them
I was surprised how quick that gased em
"Before you put up the glass to divide, Sir
Are you planning to ride her?"
"Do we have to go through it? Put the pedal to the metal, James, now do it"
Vivy sittin with her legs all cocked
I said, 'Goddamn, she gotta get her boots knocked'
Polly asked me where the bar was
And what else this car does
This car is boring and restless
p*ssy invitations, I was now on the guest list
They made a few ice teas from Long Island
You're talkin 'bout a brother that's smilin
Like a prospector stakin his claim
You mighta been dealin, but I ran the game

[VERSE 3]
Now Vivy had my limb hard as a bark
I was ready, I was set, and I was on my mark
Like a thoroughbred she was the gait
I yelled, "Time, hold up, wait!"
Before I take my iron and I brand em and bond em
I revealed my super lubricated sensitive condom
She yelled out, "Timber!", and I said, "Fall"
Damn, what the hell James gotta ring the phone for?
Just like a sucker he said he would bust me
"Chill, you're with it, homeboy, trust me"
Turned my back to fix the blind up
And in a glance they both were lined up
I had the whole world in the palm of my hand
And more p*ssy than a man could stand
Mile after mile I was stickin ol' Vivy
Polly on the side sayin, "Gimme, gimme, gimme"
Up and down, doin it to death
Y'all better hold on, there's a lot more left
There I was, drivin it deeply
The tag was made and Polly yelled, "Freak me!"
So I sent her on a far out trip
Kicked that 'don't you ever leave me on the lonely' tip
I had Polly and Vivy pinned to the mat
1-2-3, and they was out like that
They thought I was a sucker, Mr. Lollypop Man
On the bumps they would always say, "Shan! Shan!"
They were probably thinkin Grants and Franklins
I'm surprised they didn't hear the change shanklin
Since they didn't, that's too bad
About 89 cents, and that was all I had
Now as for Polly and Vivy and their big-time talk
I left them drunk bitches on the sidewalk
Just like a prospector stakin his claim
You mighta been dealin, but I ran the game 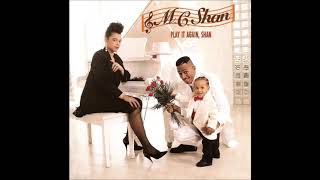 check amazon for I Ran The Game mp3 download
these lyrics are submitted by kaan
browse other artists under M:M2M3M4M5M6M7M8M9M10M11