Another One To Get Jealous Of Lyrics

Another One To Get Jealous Of Lyrics


Me and Marley Marl, we are resented, ya know?
Because of the beats and the rhymes we invented
To cold dis another's a thing that we love
So here's another one to get jealous of
Do it ya

MC's that I battled are the MC's I defeat
Now you say you took me out, now how that sound?
Do it ya

Once I'm done puttin heads to rest
I sit back and puff a spliff of buddha bless
See, in days of old mi rhyme went gold
The music, it wasn't recommended
Man used to sit on seat and tap out a beat
And went away feeling relieved
Hey ya
But soon after our rhyme is invented
And put together, it sound contented
And rhymin a-fi work
I tell you rhymin, yes it a-fi work
Bang-dang-dilli-dilli-dilli
MC's, dem like to bite the things you say
Others come along and like the beats you play
You know that's cold considered a dissin of work, ya know?
I don't deal with negativity and thing and thing
I'm the MC, and I'm also cool
Jacuzzi in my crib size of your pool
Sent di butler for my midnight treat
Rug so plush ya can't see ya feet
If ya come and visit if you choose
It's a must at the door that you leave your shoes
Don't obey and you'll have to go
Some didn't listen till my gun went bo!

>From the very first time I walked through the door
I see the people rub-a-dubbin on the floor Played the wall, a man came past
Oh my God, dem puttin fire to glass!
I dipped, I bobbed, I weaved, I shook
I hear ya pump it one time and from there you're hooked
It make you sell your car, your house, your ring
Have you flying through the clouds and you don't have wings!
He passed it to me, I said, "No," him said, "Why?"
My boy jumped up and said, "I'll give it a try"
>From the very first time he ignited the flame
My homeboy wasn't actin insane
I tapped him on the shoulder and I said, "Let's go"
He looked at me and replied with, "No"
I said, "f*ck it," and left him there
The torch, the pipe, the base, the chair
I came back five days from then
To my surprise I seen my friend
To let you know what this thing does
He was sitting in the very same spot he was
I walked over, "Want more?" he said
Pipin hot my man dropped dead
His head hit the table, the pipe hit the floor
But I'll mention that di man won't base no more!
Bo!

Hey man, let me tell ya, man
True story, no bloodclot
???? when his head hit the floor, man
Everyone cried for the coroner
Some picked up di pipe and said
"Man, dem leave em on the floor just like he lay, ya know?"
Picked up dem crumb and put it in di pipe and f*ckin pissed off, ya dig, man
Oh my God, bloodclot!
Man puttin fire to di glass thing, man
And say, "Scotty! Scotty! Where ya at, Scotty?"
To the transporter room, ya know?
"Beam me! Beam me!
Beam me, blood!
Beam me, bloodclot!" 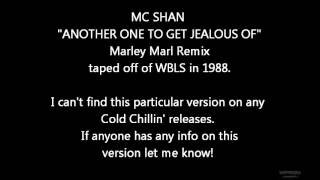 check amazon for Another One To Get Jealous Of mp3 download
these lyrics are submitted by kaan
browse other artists under M:M2M3M4M5M6M7M8M9M10M11
Record Label(s): 2007 Cold Chillin Records Marketed by Rhino Entertainment Company, a Warner Music Group Company
Official lyrics by