WLIR: Hi, we're back. Live and in stero from the Ultra Sonic recording studios. And tonight, uh, Mr. Lou Reed is with us. (audience applauding) For sure. If you wanna get out and see the band... Uh, Alice Tully Hall, January 27th in a rather rare New York appearence. Your back in New York though right? You spent a long time in the city. Lou: Yeah, we spent a long time in Europe. We were in uh, in and around London, Scotland, places like that for a while. WLIR: Have you officially moved to England? Lou: Oh, no, no, no. We just went over there cuz we hadn't seen it. WLIR: So New York is still the city of record. Lou: New York is the home base. WLIR: Uh-huh, uhh... the album was recorded in London? Lou: Yeah the album was recorded, real great studio named trident. WLIR: Trident, yeah. And David Bowie produced? Lou: David and Mick Ronson. Musn't forget Mick. WLIR: Musn't. Lou: Musn't. WLIR: How'd you like working with... Lou:(intrrupts) It'd be naughty.(laughter) That's what they, that's what they say in England, when you, when you say something, they say nah, that's naughty, that's naughty.(audience laughter) WLIR: But they don't say that in New York? Lou: No man, they'd punch ya out if ya did!(roaring laughter) WLIR: I dunno, I dunno, how'd you like working with David? Lou: I loved working with David, David's a terrific empathy. WLIR: How do you, how do you account for the fact that...(snickering laughter) Lou:(laughing) Not that way! (more audience laughter) WLIR: How do you account for uh (Lou: WHEW!) during his performance at Carnagie, he dedicated what seemed like and entire half hour to Lou Reed and did a couple of Lou Reed tunes. Lou: I guess he likes 'em. (audience laughter) WLIR: Yeah? After all these years suddenly for the energy to start, to start coming back again... Lou: Interesting isn't it? WLIR: It's is, it is! Lou: Yeah. WLIR: I guess it must have been there all along. Lou: Yeah, I-I-should think so, ya know... WLIR: Where's Doug Yule? Lou: Uh, dead I hope. WLIR: (gasping from host and audience) Whoa! I went to high school with Doug Yule, you can't say that! Lou: Oh well I can say it, but I didn't mean it. WLIR: You worked together on the "Loaded" album. Lou: ye-uh-well, we WORKED on the Loaded album. WLIR: And that was, that was "the" final venture? Lou: That, that was it. WLIR: That was the end of it. Lou: That was the end. WLIR: The end of your proverbial era as it were. Lou: Well the end of that era... is it era(eer-a) or era(eh-ra)? WLIR: Era(eh-ra)? It's an error to call it an (eer-a) Lou: Is it an error to call it an (eer-a) or is it an error to call it an (eh-ra)? WLIR: It's an ear! Lou: An ear? Of corn?(laughter) WLIR & Lou: It's an era. WLIR: Do you think, do you think we'll ever see the Velvet Underground together ever again, performing or playing? Lou: Well, which permentation of it? (someone in the audience: Anyone!) Well, there's a version of the Velvet Undergournd that's in London right now that's uh got the original drummer and has Doug Yule and two other people in it. WLIR: Oh, so Doug Yule's working, he's not dead! Lou: No, he's not dead, he's not dead. WLIR: How 'bout Lou Reed and the Velvet Underground? Lou: Nah, no chance of that. WLIR: And what about the Thunder Thighs? Lou: OH! If I had 'em here! WLIR: These are not the Thunder Thighs... Lou: No, these are not...(a member of the band: I thought I was a Thunder Thigh!) (laughter) He thought he was a Thunder Thigh then I hadda tell him he wasn't and he got very depressed. WLi R: Why don't you tell me who IS playing here with you tonight? Lou: Oh, we have Bobby Resigno, Vinny Laporta, Eddie Reynolds, and Scott Clark. (audience applause) WLIR: Ok, well, talking about New York city and the Velvet Underground certainly epotimized what I think New York really was to a lot of people for a long time at least, at least during... Lou: Most of whom are now in jail. WLIR: ...or dead. Lou: Or dead. (laughter) WLIR: Uhhh, good to hear that you are still a member of this uh, this insanity. Why don't we go back and do something from the old days... from Velvet Underground, New York, 19 what 63-4? Lou: No, nooo, no about circa... I guess... do you know the story about how I wrote this song? WLIR: Please, please tell me. Lou: I was workin' for a record company as a song writer, where they'd lock me in a room and they'd say write 10 surfing songs, ya know and I wrote "Heroin" and I said "hey I got somthin' for ya" ya know... and they said, NEVER HAPPEN, never happen. So that's what we'll lead our set off with. WLIR: Ok, thank you. (audience applause) Lou Reed Tuesday night concert WLIR FM. Lou: (starting the intro) Yes, it still exists. Now in the original days, not only was it banned but they wouldn't take advertisments for our album because of it. Now here we are doin' it over the radio... very funny (applause) K, here we go... This is the rock version, it's called "Heroin". They play the song and in the middle Lou shouts, "I tell ya, a junkies dream hahaha" 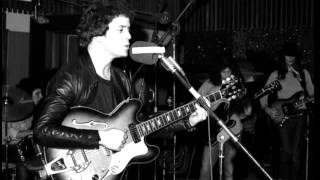