When her body gave into that sickness again
(She always knew it would),
She didn't want to say a thing for fear
That if he knew, he'd never risk
Getting even this close to her. Fever
Has made her shameless. She's desperate to infect,
And she'd kill to hear him moan with misery,
Burning sweet, keeping her suffering company with his,
Bowels twisted from that seductive disease.
Some shit spreads with a secret contagion,
And you'll either be fascinated or repulsed
By the velocity of defeat.

A masochist, neither one of us satisfied
Until I'm writhing. And I overheard them say,
"Our guinea pigs are in for it; We're straining day and night to find the origin
Of this mutant strain,
Once microscopic, now epidemic,
Which crawled it's way into her brain."
She didn't ask for it, but she's passing it
To everybody she meets.
And it might not be the most pleasurable thing,
But the sensation can be so addicting.

Well, it wasn't caused by amphetamines,
But his dopamine levels are unquestionably depleting,
And my favorite hypochondriac is starting to display
Symptoms of hysterical paralysis.
All the doctors can say is, "There's nothing physically amiss."
Isn't it ironic? I'm the sadist,
But now it seems he just might be immune to what I inflict. 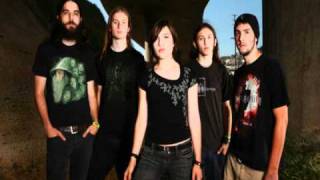