The Sun Is Also A Warrior Lyrics

The Sun Is Also A Warrior Lyrics


Leslie Fish (c) 1986
Two men walked on the beach in the sun.
One left footprints, the other left none.
One was a man who no man obeys;
The other a god from the ancient days.
"Look," said the man, "how my kind make war.
I summonned you here to ask what for."
"For wealth or land," the god replies,
"For life, or freedom, or some king's lies."
CHORUS:
"The sun is also a warrior.
Knowledge can also destroy.
Nor can the kindest will,
Preserve you from the kill.
Not all of wisdom brings joy."
"Four of those five," the first one said,
Are not enough to appease the dead.
To save my world all this strife must cease,
So now I bid you to conjure peace."
The god said "Yes. Though it grieves me sore,
For I was also a god of war,
And I remember what you forget,
Four of those five you may still regret."
CHORUS
He raised his voice and he raised his hand.
All strife stopped at the god's command.
No voice ventured an angry word, No hand struck and no weapon stirred.
In time, the man called the old god back.
"Look," he cried, "what my people lack!
One lord rules over all the earth,
And we're all his slaves from the hour of birth."
CHORUS
"Look, he owns all wealth, and he owns all land,
We starve and die under his command.
He speaks the truth and he gives us peace,
But all that I hope for is our release."
The old god said, "This is what you willed.
For only thus is your wish fulfilled.
War's five sources I took away,
Yet I will give four of them back today."
CHORUS
He raised his hand and his voice once more,
And all the world overturned in war.
And when the last of those fires let fall,
There was no lord in the world at all.
"Go rebuild now," the old god said,
"Feed the living and bury the dead,
And remember this when you speak of war,
And think upon what is worth fighting for."
CHORUS 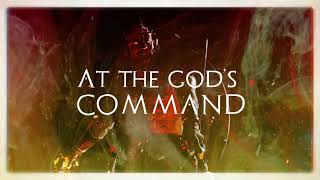 check amazon for The Sun Is Also A Warrior mp3 download
browse other artists under L:L2L3L4L5L6L7L8
Record Label(s): 2012 Prometheus Music
Official lyrics by