Last Emperor's back and you know upon hearing me
Emcees are scared so prepare for Rap Tyranny
There's no comparin' me
Most men?
Fearin' me
(Broke no it's a rarity???)
Mics I hold dear to me
Cool and sincere one
People wanna hear from
Words penetrate eardrums like spearguns
Run home
Unknown places I appear from
It ain't none of that jumpin' off over here son
I clocked you
Beat you
Had to stop you
Greet you
I write rhymes in Hebrew, Arabic and Greek too
I get so high, the slightest drop is lethal
Like the South American city of Macchu Picchu
Ladies say I do my thing with a passion
Brother like the way I swing into action
When I'm not coolin' in the crib, just relaxin'
I'm out in the streets with the Red Army faction
I specialize In microphone vandalism
Surround sound, or better yet panoramic vision
People of Earth know and understand the wisdom from
Monotheism to third-world animism
I get the best of men as the record spins
I stretch my limbs and rhyme till the session ends
No matter if, we enemies or the best of friends
Against the Emp you can never expect to win... [chorus]

Subjects and predicates
Proper mic etiquette
All beef, I'm deadin' it
Hip-Hop confederate
Face me, you better get
High priest and Jesuits
Against the Emp your attempts will seem effortless
I make the girls wanna kick their heels up
Klingon warships throw their shields up
Rippin' the reels up
Wounds never heal up
Mad Soul controls the razor-sharp steel cuts
High Tech or digital
Audio or Visual
Man or Machine can't defeat the Aboriginal
Rippin' through
My words are poisonous and medicinal
With the power to heal and at the same time, cripple you
You don't get a chance to rhyme
This is battle time
Even the brolic get silent like a pandomime
The nicest point guard couldn't even handle mine
With more magical music than Rogers and Hammerstien
I made it to the top with a crew of born losers
They told me the game was locked till I tore through it
I get more props than a movie by George Lucas
In two-thou look out for the Storm Troopers
Don't sweat mine
Learn to respect mine
I bring womb to the REC Room when it's rep time
Blast like nine shots
Travel like TimeCops
Aiyyo Mad Soul, this is where the rhyme stops... 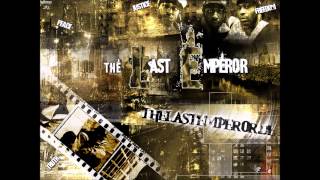