[Verse One]
Being righteous is my career and conflict is just a job risk
No stoppin this when I build rhymes like an Egyptian obelisk
Watch me get down in your Province, town, or populace
Cause in my life: rhyme is Prime, posses the matrix like Optimus
Now you'll get framed like a diploma in your spiritual coma
I'ma black Moore like Othello, but I won't die for Desdemona
Own a diamond-studded mic, walk on a stage of solid marble
Leave the flyest MC's startled and yell "Shazam" like Captain Marvel Are you no comma even though he pauses aware of the fact that I left mankind devastated?
And they still look for the blueprints
of the monuments that I've created
See the Gods live, don't compare my hard drive to your floppy disk
Chicago to Gotham City, New York to Metropolis
From city streets to Athens, Greece from the pyramids to the Acropolis
My final resting place will be a solid gold sarcophagus
But what I can't understand is how these foolish humans
use the mic to their advantage
And get lost like the City of Atlantis
Your a long way from Kansas, and this is more than just black chrome
You gotta be fresh, yes, and never talk in no wack tone
Cause once I got you in my attack zone
You could click your heels three times like Dorothy
and couldn't get back home
So, drop the mic and save those wack rhymes for later
Cause my battles leave more Broken Arrows than Christian Slater
"May the no comma force be with you"
It's true nothing in life is coincidental
The Emperor is monumental

[Verse Two]
Breaker one-niner, it's the democratic socialist rhymer
On stage I keep out invaders like the Great Wall of China
My style transcends where the divine starts and man ends
Understand friends, colleagues, comrades, companions
Los campaneros who erect stone temples like pharaohs
Such an American Zapatista, rough
The empire builders must construct societies
Thats the difference between my spirit and the man that deceives The imperial to the masses, imperialistic fashions
Titaniums and plastics, alkalies and acids
From the cradle to the casket fantastic stories are told
Stolen maps are sold leading to hidden cities of gold
Hold your ancient art form sacred, let not the 85 forsake it
Hitler's armies saw it in 1945 and tried to take it
Infiltrate it and break it, no substitutes nor replacements
I've got a Stargate leading to other dimensions in my basement
Harness the energies of the mind, designed to empower spaceships
My crew builds on political science and international relations
Feed off sunlight when the Earth grows void of vegetation
Attack the U.N. like the Klingons did the United Federation
Fully operational, mobile, global and intercontinental
The Emperor is truly monumental

[Verse Three]
When worlds collide and are destroyed by earthquakes and tremors
What I build serves as a culture for generations to remember
From the cold-hearted to the tender, any ethnicity or gender
Slaves to a higher power, you gave freedom when you surrender
Bend your steelo ), save that gangster talk for Quentin Tarantino
I gets deeper than those 20,000 Leagues on Captain Nemo
So, abort the mission or get played out of position
Never let technology override this oral tradition
I'ma rather odd man, here to carry out the God's plan
While you try to be larger, I stay camouflaged like Zartan
I don't rhyme just to cash checks, but to create new aspects
Blacks and Latinos are really, Kemites and Aztecs
Some voices got treble, some voices got base
The Emperor's got the voice that be all up in your face
Now some MC's drop one single and vanish without a trace
Call me Lord Vader, the baddest black man in outer space
Mechanically rhyme prone, any MC or time zone
Hard rocks get broken up into small pieces of limestone
To put it plainly modern forms of psychology can't explain me
There's no man-made religion that can't contain me
See I realized that in the mind is where each man
must build his holy temple
Now thats the true meaning of monumental 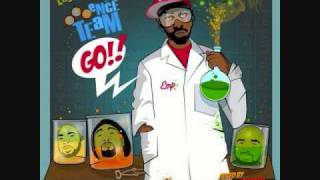