Monolith
Last Emperor
Do You Care Secret Wars Ii Single Mother Fo'rel Here We Are The Umph Some Love Some Hate Away From The Sun The Underground Secret Wars Pt. 1
Monolith video Last Emperor twitter


[Verse 1]
I stare into the face of death
and the fear that's so obvious
wordplay is the way that I conquer it
shivalry's not dead if the living honor it
i send a message to men on all continents
and this is my imperial decree
to who so ever steals material from me
the emcee who comes with new abilities
and the same man in king david luther's philistines
cuz when it comes to emcees they leave you
no choice but to destroy the embodiment of evil
deadly force against the source of upheavel, that seems to
oppress and bring death to my people
the way to defy this death
is to keep kicking rhymes until there's no rhymes left
the emperor takes the form of the giant dredd
with the body of a man, and a lion's head
and this dence urban jungle of great disorder
cd players, turntables and tape recorders
become the tools that I use to erase the borders between me and the secret and ancient order
that I swore to protect and uphold
if you're looking for the bloodiest battle, you've struck gold
from young to old, ripe and then rotten
i came to drop bombs like osama bin laden
using poisonious chemicles to shower fools
ravenous animals devour fools
i build a giant robot to overpower crews
using pens and pencils like power tools
a fifty-foot metal man, named lyricore
will stand up to the bully and hit him in the jaw
cuz when I step in the door
it takes a minute for the emperor, senator, madator, minitor
kicking bitterness to show it ain't sweet
whether it's a dark cave, or the middle of the street
cuz the only thing happening the next time we meet
is the thrill of my victory and agony of your defeat [echoes] 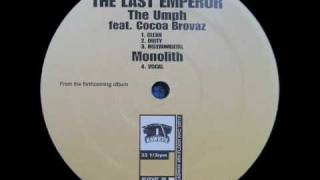